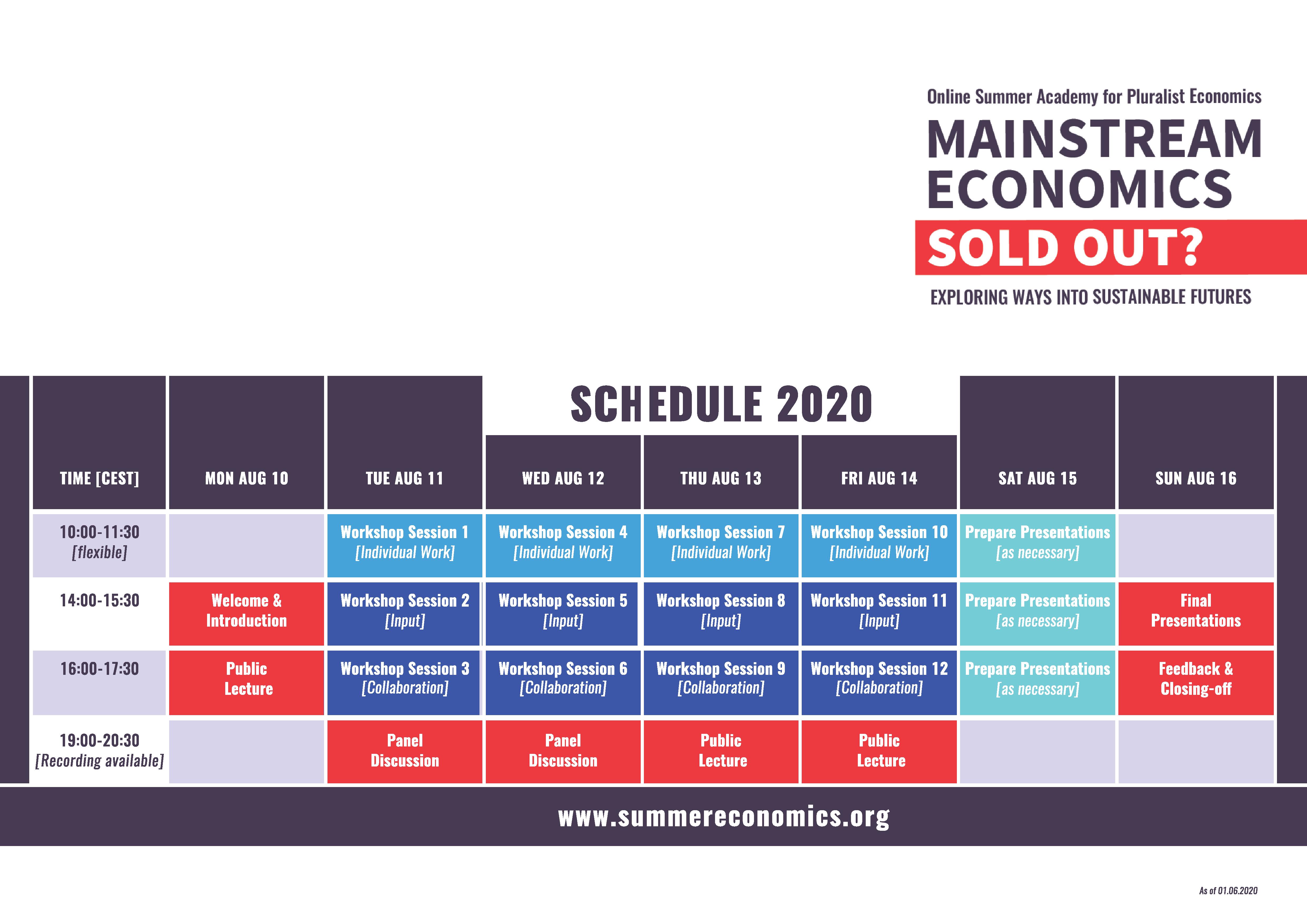 There will be three evening lectures and two panel discussions on topics of special relevance to the event’s overall theme. High-level experts and well known public speakers will share their views on the issues of pluralism in economics, capitalism, sustainability, international solidarity and development. Each lecture or panel discussion will be supplemented by a subsequent Q & A session. The whole evening program will be made publicly available through live streams and recordings, so that people from all over the world, including those in different time zones, can benefit from it.

Heterodox economics is concerned with the study of production and distribution of economic surplus, including the role of power relations in determining economic relationships, the study of economic systems beyond market relations, and the employment of theories focusing on these issues (Kvangraven and Alves, 2019). This approach can enrich our understandings of our economies’ weaknesses and of how to build a more resilient and just economy. This is an imperative moment, as we need an explanation of the crisis that is capable of seeing the economy as more than just markets and, rather, as embedded in society. A fundamental change in the prevailing economic narrative is necessary for a more just, robust, and democratic society.

The Sustainable Development Goals (SDGs) of the United Nations are considered a universal benchmark for development around the world. But is it realistic to have such a benchmark for countries/regions whose societies are structured within different local contexts? During this discussion, the panelists will share their perspectives on what development is, on the relevance of the SDGs, and on what a new development paradigm could look like in light of the COVID-19 pandemic.

Aug 12: From the Imperial Mode of Living towards an Ecologically Sustainable Future (two 30 min. lectures with discussion)

The concept “imperial mode of living” analyses the multiple phenomena of crisis that are shaping our current moment as a systemic crisis of capitalist development. It tries to explain how and why capitalism ceaselessly exploits the biophysical world and yet remains resilient in face of its manifest failures. It basically points, first, at the socially and ecologically destructive and, at the same time, attractive and increasingly globalized patterns of production and consumption. They are imperial in the sense that they assume an – in principle – unlimited appropriation of global resources and labour capacities, mainly by the global North but increasingly also by parts of the global South (particularly the so-called ‘emerging economies’). Secondly, the “imperial mode of living” depends on an external sphere from where resources are extracted and to which its socio-environmental costs can be shifted (“externalization”), resulting in the “internalization” of those burdens in other regions like Latin America. The concept can also help us to rethink resistance and alternatives.

In this evening’s lecture, Ulrich Brand will give an introduction to the concept “imperial mode of living” and its implications for current debates surrounding climate change and the ecological crisis. Then, Ivonne Yanez will expand on this introduction from a global South perspective by outlining practices of resistance against the “imperial mode of living” through environmental activism in Latin America. This will lead to the question of how an alternative, i.e. an ecologically sustainable future, could look like.

Aug 13: Economics and Morality in Times of Crisis (panel discussion)

Economics students are being taught that there is a distinction between normative and positive economics, the latter being a value-neutral analysis of human behaviour and society. But does this promise of economics as a value-neutral science actually hold? After all, the so-called classical economists like Adam Smith, David Ricardo and Karl Marx were largely invested in questions of political and moral philosophy rather than the study of human behaviour as a trade-off between conflicting ends and scarce means, as (neoclassical) economics is commonly understood today.

This panel questions the conception of the human underlying mainstream economics. In fact, the so-called homo oeconomicus is not value-neutral and, thus, already implies certain philosophical and moral assumptions, which are rarely made explicit in mainstream economics. This shall be the starting point for a broader debate on a more just global economic system and international solidarity in light of the coronavirus crisis.

Aug 14: The COVID-19 shock: Crisis as usual or something new? (closing lecture & discussion)

The coronavirus and the reaction to it have plunged the world into a deep economic crisis. What is new about this crisis, and what crisis patterns do we already know from the 2008 global financial crisis?

The state has a central role to play in this, and previous taboos are falling with astonishing speed. Central banks and governments have so far reacted very quickly to the crisis and mobilized enormous resources. Are we experiencing a global paradigm shift or rather a "business as usual"? Who is winning, who is losing in this crisis? And how is the new economic crisis intertwined with the global climate crisis?

The British economic historian Adam Tooze has written a bestseller about the financial crisis of 2008 and its consequences with "Crashed". Now he examines how the corona crisis is changing our world.

Apply for the Summer Academy