Summary of Workshop #4: Pluralism in Practice

Report on the workshop Pluralism in Practice at the Exploring Economics Summer Academy, August 2017

Pluralism is important. Not only for understanding complex and changing phenomena from a scientific perspective but also for policymaking, which set itself the task to cope with such phenomena and change them.

As a basis for bringing in different pluralist perspectives, the workshop elaborated on Neoclassical, Behavioural, Institutional, Complexity, Feminist, Ecological and Austrian economics. These schools of thoughts were examined as to their views on individual behaviour, on their political system implications, their objectives and their relation to questions of justice. 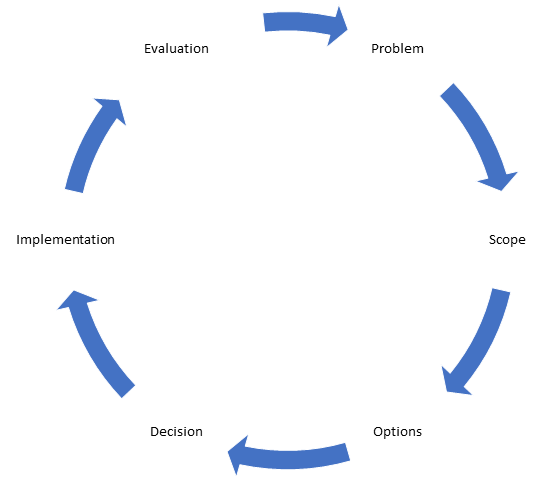 The policy process (Figure 1) starts with the identification of a problem. Neoclassical economics usually defines this as a market failure, while other schools may emphasise power structures, systemic risk, fundamental uncertainty or non-linearities such as ecological tipping points. Furthermore, in the neoclassical case, cost-benefit analysis takes place before the decision, which is not necessarily the case outside of it.  Other approaches may, of course, impinge on the scope, the conceivable options and the evaluation methods. Complexity economics would for instance rather apply a systems perspective to scope, options and evaluation, whilst other perspectives offer a more contained approach, where a discreet cause-effect relationship is assumed. Moreover, approaches that are organized around a specific concern such as environmental damage may put different options on the table based on a diverging assessment of the scope of the problem.

An application example for the working of the policy cycle is the crafting of regulations. Problems discussed within this framework include the consequences of excessive sugar consumption, nitrogen oxide emissions or freeriding behaviour on public transport. The discussion illustrated the usefulness of applying different perspectives from a variety of schools of economic thought. For instance, thinking about air pollution from a feminist perspective highlighted the distributional impacts of both the problem and possible solutions, while the institutional view provided for insights on the importance of social norms concerning mobility patterns. Regarding the freeriding issue, behavioural approaches would rather point to ‘technical’ or ‘informational’ solutions such as changing the default options or the ease of purchasing tickets, whereas institutionally oriented policies would zoom in on socialization and cultural patterns such as the stronger identification of the users of public transport with their service. Finally, possible policies to tackle overconsumption of sugar in addition to the standard neoclassical prescription of a tax were found in behavioural economics. Examples include a signalling system based on colours or points, making a sugar-free alternative the default option when ordering soft drinks, or arranging food in canteens such that fruit and vegetables are more visible.

When discussing the topic of globalisation, it became apparent that applying the different perspectives to such a broad (macro) issues constitutes a far more demanding task. While the perspectives are able to hint at a variety of issues such as winners and losers of trade and global imbalances, political economy concerns related to the implementation of policies are far more important. Hence, power relations, as well as the nuts and bolts of global policymaking, are essential.

One of the two cases studied in depth was the WTO’s Aid for Trade programme. It involves trade capacity building in the Global South thus overcoming supply-side and trade-related infrastructure obstacles. Even though developing countries decide where to act within this programme, the discussion highlighted that the structural competitive advantage and unfair trade practices of strong economies limit the effectiveness of such initiatives.

The second case study dealt with reforming water abstraction in England and Wales. The problem is decreasing stocks of groundwater in case of consecutive dry winters, which is particularly severe in South East England. Traditional licensing that allows landlords to abstract a given amount of water each year exacerbates the risk of overuse, and hence drought. A political solution thus had to reform the licensing in line with water availability. In order to develop policy options and to forecast the effects of water shortages on the behaviour of farmers in the region, an Agent-Based Model (ABM) was developed. This model illustrated the interlinkages between developments in the hydrological (natural) system and the decisions of the heterogeneous agents. Rules of behaviour and further calibration of the model were based on extensive data gathering which inter alia involved surveys and focus group interviews. The modelling led to a range of scenarios, which helped to draw conclusions about the impacts of different systems of allocating and trading licenses and water.

From the discussion of both the merits of different economic approaches and the nature of the policy cycle, it can be concluded that there are opportunities as well as benefits to increasing the presence of pluralist thinking in policymaking. Assessing problems ranging from small-scale issues such as public transport freeriding behaviour to big issues like globalisation led to the insight that a broader range of perspectives potentially increases the quality of decisions. On the other hand, the resulting increased complexity potentially slows down and complicates the decision process, adding to feasibility concerns. On the strategic side of getting pluralist thinking into the policy process, the fragmentation of policymaking to many different actors such as governments, think tanks, consultancies etc. makes it imperative to get involved with multiple actors from the policy network.