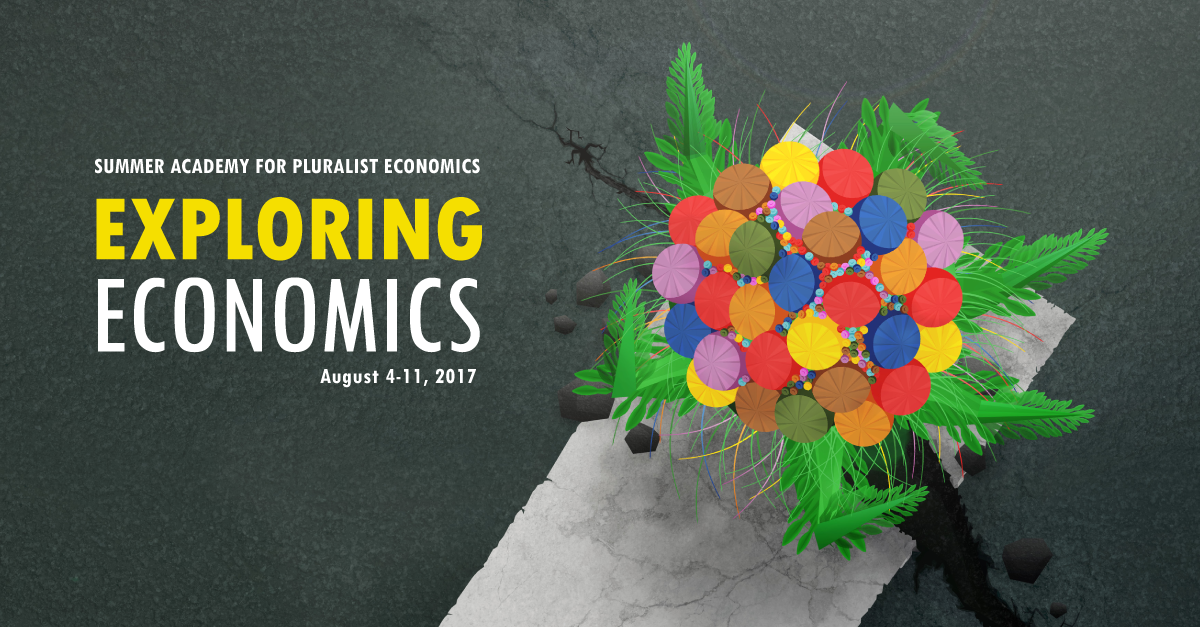 Alyssa Schneebaum is currently working as a postdoc with a research scholarship in the department of economics at Wirtschaftsuniversität Wien. She studied economics at University of Massachusetts-Amherst (M.A. and Ph.D) as well as feminist theory (Graduate Certificate in Advanced Feminist Studies). Furthermore, she is working as a Consultant at the reputable  Williams Institute of the University of California-Los Angeles. Her focus in research lies in applied job market economy with an emphasis on economic inequality and the role of gender in the economy.

Katherine Trebeck works in Oxfam's Research Team where she is working on Oxfam's human economy ideas. She has worked with a social enterprise and spent three years researching how Indigenous communities in Australia were able to get a big mining company to change its behaviour.

Elsa Egerer is an economist and sinologist and, after years of voluntary work for pluralism in economics, now involved in the new master programme Pluralist Economics at the University of Siegen. She teaches “Introduction to Pluralist Economics” and “Philosophy of Science Foundations of Economics” and is part of a FGW research project investigating the economic textbook landscape in Germany.

Ivan Boldyrev is philosopher, economist and historian, scientific researcher at the Ruhr-University Bochum and Assistant Professor at Radboud University Nijmegen. He published numerous works on history of science and philosophy of economics as well as Hegel and twenty century’s critical theory. Recently published: Ernst Bloch and His Contemporaries (with Carsten Herrmann-Pillath), Hegel, Institutions and Economics; (edt. with Ekaterina Svetlova) Enacting Dismal Science: New Perspectives on the Performativity of Economics.

He has particular expertise in using agent-based modelling (ABM) having produced the first Government impact assessment using an ABM. He is now advising UK Government chief economists on building capacity to use ABMs across government.  He has recently addressed the OECD on the policy application of ABMs.  He also has expertise in institutional and complexity economics and is advising organisations on the implications for regulatory design and implementation.

William Hynes is Acting Head of the New Approaches to Economic Challenges (NAEC) Unit in the Office of the Secretary General at OECD and an Adjunct Professor of International Economics at the Johns Hopkins University School of Advanced International Studies. He previously acted as an advisor on the G20 Finance Track in the Sherpa and Global Governance Unit, a senior economist in the Office of the Secretary General and a policy analyst in the Development Co-operation Directorate at OECD. Prior to this Hynes was an Economic Affairs Officer in the Office of the Deputy Director-General and the Trade and Finance Division at the World Trade Organisation. He holds a doctorate from Oxford University and was a Marie Curie Fellow at the London School of Economics.

Jana Gebauer works as a researcher, lecturer, and consultant in Berlin. At the interface of topics such as post-growth economics, alternative economy, and corporate responsibility, she is looking for ways and contributions of entrepreneurial actors to a social and ecological transformation. Jana Gebauer is also a Fellow at the Institute for Ecological Economy Research (IÖW).

Michael Ertl is a prae-doc researcher at the research institute Economics of Inequality (INEQ) in Vienna and also works for the Austrian Federal Chamber of Labour (AK Wien). His research interest is on distributional issues with a focus on wealth inequality.

Miriam Rehm holds a PhD in Economics from the New School for Social Research, New York. She has worked with several multinational organisations and taught at universities in New York and Vienna. She is currently an Economist at the Austrian Federal Chamber of Labour (AK Wien). Her research interests are macroeconomics and distribution.

Jannis Eicker studied Social and Economic Sciences in Erfurt and Global Political Economy in Kassel. Currently, he is writing his PhD on the rise of right-wing parties and movements in Europe from a historical-materialist perspective. He is active in various political contexts, for example as a member of the editorial team of an anthology on Pluralist Economics.

Anil Shah studied Global Political Economy at the University of Kassel and is now working as an expert for campaigning and public relations in the European project SUPPLY CHA!NGE. He has been a member of the Netzwerk Plurale Ökonomik (Network for Pluralist Economics) since 2012 and contributed to the online platform exploring-economics.org. He recently published “Destructive Creation. Analyzing Contemporary Socio-Ecological Conflicts as Frontiers of Capitalist Development” and “Die Wiederkehr der kommerziellen Gefängnisarbeit in den USA” (The return of commercial prison labour in the US).

Claudius Gräbner is a research associate at the Institute for the Comprehensive Analysis of the Economy (ICAE) at the Johannes Kepler University Linz. He holds a degree in social sciences, economics and law from the University of Erfurt, Germany, and obtained his PhD in economics at the Institute for Institutional and Innovation Economics at the University of Bremen, Germany. His research interests include computational economics, development economics, network theory, game theory and econometrics. His research on the evolutionary analysis of social institutions, the methodology of social sciences and the microeconomic effects of free trade agreements has been published in journals such as the Journal of Institutional Economics and the Journal of Economic Issues and was awarded various prizes, including the WiWa Young Scholars Award for Pluralist Economics.

John King studied Philosophy, Politics and Economics at Oxford University. He taught at the University of Lancaster and the School of Economics at La Trobe. In 2005 he was elected Fellow of the Academy of the Social Sciences in Australia. From 2000 to 2006, he was the editor of the History of Economics Review. John King retired in July 2013 and was appointed Emeritus Professor at La Trobe University in August 2014. His research interests are in the history of heterodox economic thought and in pluralism in economics. Recent books: The Microfoundations Delusion, David Ricardo and Advanced Introduction to Post-Keynesian Economics.

Steve Keen is an Australian economist and best-selling author. He was a professor at the University of Western Sydney and holds a chair at Kingston University in London and considers himself a post-keynesian economist. His research focusses on mathematical modelling and simulations of financial instabilities, mostly based on Hyman Minsky’s financial instability hypothesis. Due to his two best-selling books Debunking Economics and Can we avoid another financial crisis?, he is a prominent figure in public debates on economic policy.

Ms Athena Peralta serves as programme executive for economic and ecological justice at the World Council of Churches. Previously she worked with the National Economic Development Authority of the Philippines as senior economic development specialist. Her research and advocacy focus on the intersections between economic, ecological and gender justice. She completed her M.A. in economics of development and post-graduate diploma in feminist development economics from the Institute of Social Studies (Erasmus University) in The Hague in the Netherlands.

Friederike Habermann is a German economist and historian with a PhD in political science as well as an author and an independent academic.

Born in 1967, she became involved in politics in the beginning of the 1980s. In 1996, after having been responsible for the economical section of a left wing daily paper, she was taking part in the First Intercontinental Meeting against Neoliberalism and for Humanity in Chiapas, Mexico, and became active in the global resistance movement or, more precisely, responsible for press work in Peoples Global Action. In „Geschichte wird gemacht. Etappen des Globalen Widerstands“ (2014) she told this story. In her most recent book “Ecommony” (2016) she stresses the possibility for even a global economy that is based on commons and that is creating commons. In all her books, she tries to combine an analysis of transformational processes with a feminist perspective.

Graeme Maxton is secretary general of The Club of Rome.