1.    Background
2.    The Role of Business
3.    Focus SME: Analyzing Non- and Post-Growth Orientations at the Company Level
3.1.    Growth-related Situations of an Enterprise
3.2.    The Perception of Choice and Motives to Grow or not to Grow
3.3.    Growth Independence and Post-Growth
4.    So are there Approaches “on the ground” which are in line with Post-Growth Principles?
5.    Final Remarks
6.    Basic Readings
7.    References

The West (or North) is overstepping the limits of the planet’s capacity to sustain life by their ever-increasing drive for growth and profit. The way the contemporary economy functions destroys our planet and the social fabric of our society. This bears the questions, why is our economy still growth-oriented? We are told that growth generates jobs, fights poverty and inequality, finances the social security system, reduces debt, and expands environmental protection and resource efficiency. However, these promises and assumptions can be put into question. While the environmental and social problems are becoming more severe, attempts to decouple environmental degradation and economic growth – promoted by the sustainable development discourse – has not proven to work out. Thus, green growth is a myth. Fundamental change to our socio-economic system is required which entails a necessary departure from the growth paradigm: a social and ecological change towards a post-growth society based on principles of sufficiency, solidarity and democracy.

2. The Role of Business

When we think of the economy, we tend to think of the well-known – often internationally operating – business enterprises. These enterprises tend to operate based on a capitalist logic and explicitly or implicitly aim for growth. In our workshop, we have tried to change the narrative of our economy by including a wider variety of enterprises in our analysis, namely small and medium-sized enterprises (SME) and “alternative” economic actors such as transition enterprises, cooperatives, social and sustainable entrepreneurs and solidarity economy initiatives. Many of these enterprises have a different relationship with growth. By focusing on these enterprises and telling their stories, we aim to change the narrative and therewith the way we look at the economy. This way, we demonstrate with concrete examples that enterprises can operate without exploiting people or planet, even within the current regulatory and institutional structures.

With this ‘diverse economies’ approach, we seek to rethink the economy and economic representation. This holistic approach allows to not be blinded by the dominant conception of the corporation (the ever-expanding transnationally operating business enterprises) and to study and strengthen the business models of enterprises that depart from the growth-path and operate based on the principles of sufficiency, solidarity and democracy.

According to all the quantitative surveys, only the minority of small and medium-sized enterprises (SME) realizes or even aims at strong growth. SME managers tend to show limited growth ambitions putting restrictions on how big and how fast to grow. Figure 1 shows how managers from 700 SME from the German-speaking region answered the question of the relevance of growth for their current corporate strategy: 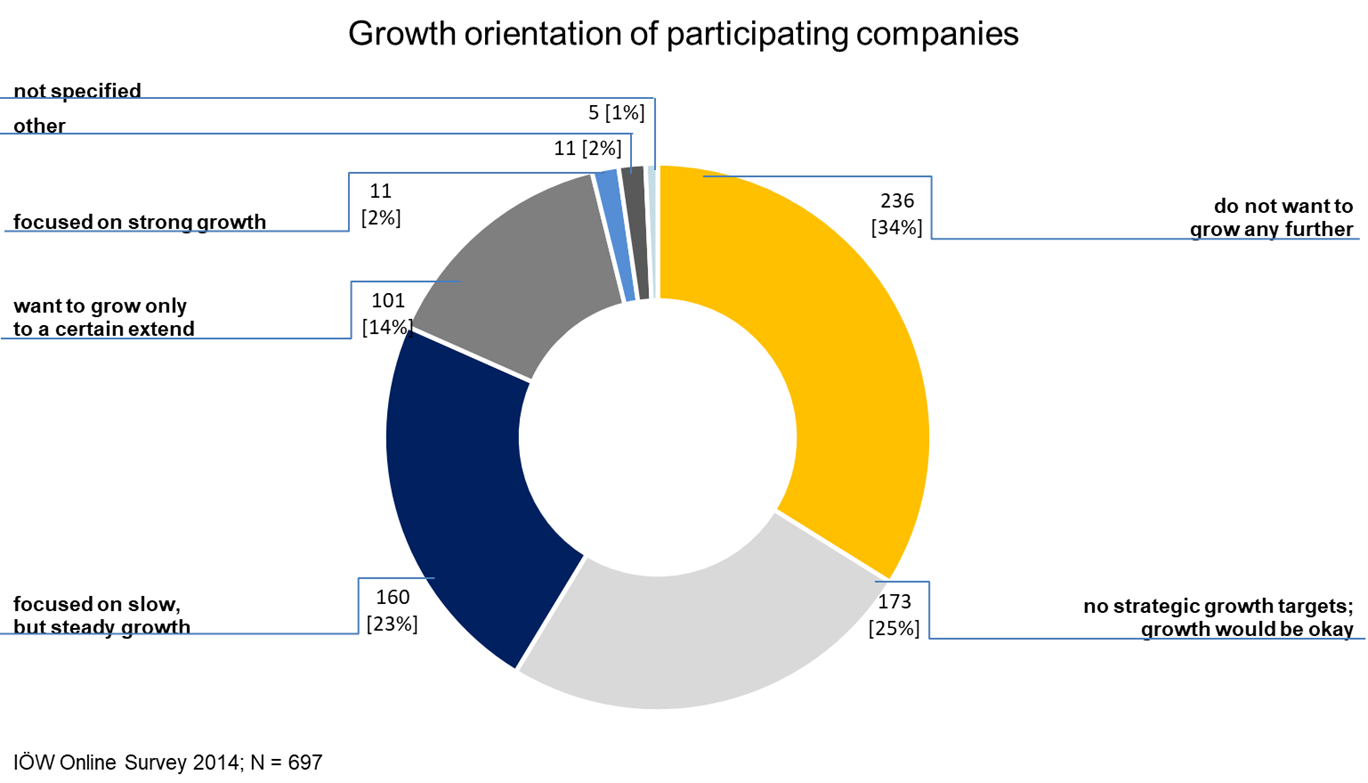 Figure 1: How important is growth in size for SME strategies? (source: Gebauer & Sagebiel, 2015)

However, the limited growth perspective expressed in this survey should not be confused with a proactive non-/ low-/ slow- or even post-growth decision of the partaking entrepreneurs. Various external factors might be limiting the growth potentials of a company (e.g. market saturation, competition, resource scarcities) with the entrepreneurs (temporarily) adjusting their growth ambitions respectively while fighting for economic survival.

In order to distinguish and better understand the situations, motives and approaches of those companies which proactively left the growth path, explorative qualitative case studies are helpful. Their findings might, in turn, help other entrepreneurs to not only survive economically but to become more resilient and improve their qualities.

Explorative case studies that have been conducted so far typically cover five central topics and reveal the necessity to distinguish between approaches of growth-independent and post-growth-oriented entrepreneurship, as shown in figure 2. 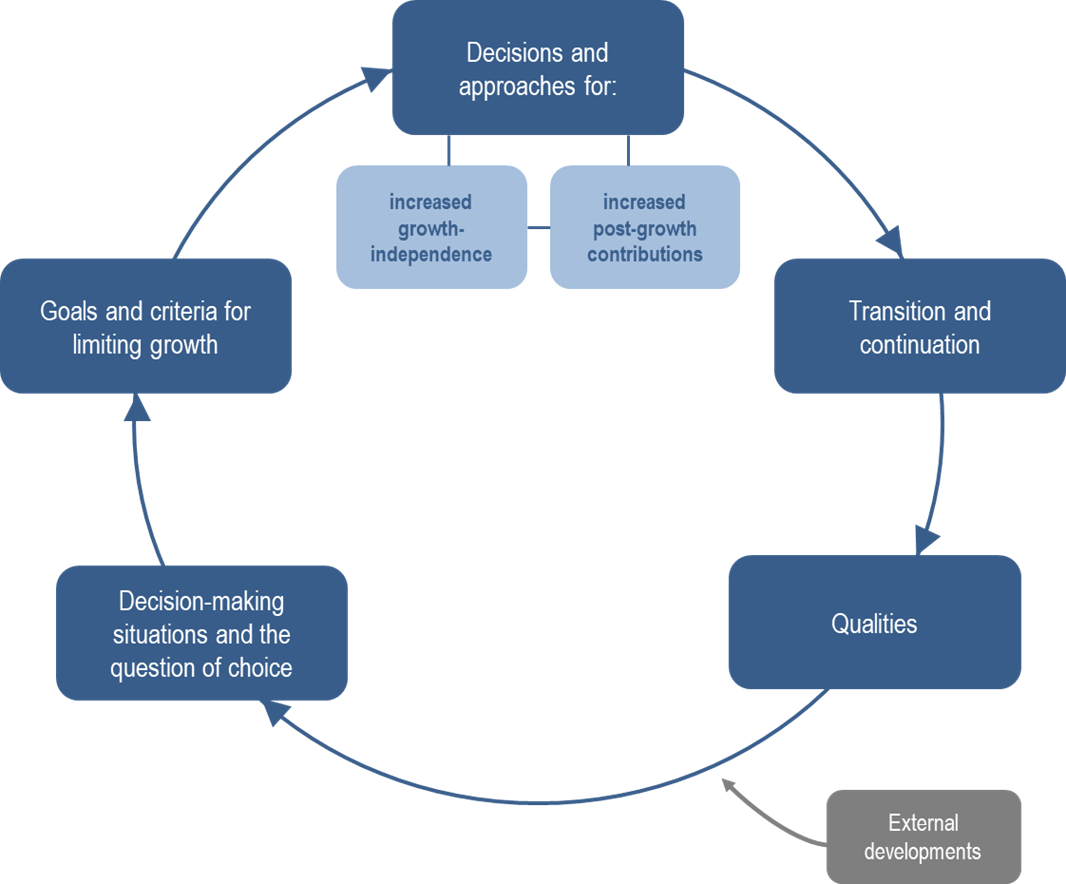 3.1 Growth-related Situations of an Enterprise

Many potentially growth-effective decisions pass almost unnoticed in day-to-day operations, like taking on a new customer and replacing old machinery or the current distribution channel. The need for entrepreneurs to more deeply reflect on the growth issue usually arises in the early phase of a company or in situations with major demands for change:

Contrary to common thinking, in the early development phase, few entrepreneurs have a clear growth strategy which means that they have an idea of how big to start and how fast to grow. Most start with diffuse, non-explicated growth expectations and then realize that they need to reach a certain minimum firm size to survive on the market (e.g. realize economies of scale, depending on the sector). There are risks in terms of becoming growth dependent during this phase which includes decisions to taking up capital (stakes or loans) for initiating the business and reaching a viable firm size.

When a business has succeeded in establishing itself in a market and faces an increasing demand it typically needs to decide whether or not to go to the next level. Usually, a business can decide to expand capacities (e.g. in terms of machinery and employees) to satisfy the increased demand or to keep the production at its current level. Growing with an increase in demand often entails a significant jump in size to the next level which cannot be reversed easily. Risks in this phase include changes in customer expectations and the competitive environment, pressure from investors and a fundamental change in the character of the company.

When companies work on the margins of their capacities they might face personal and organizational stress. When they then decide to grow and experience a sharp slump in their sales again, their existence is at stake. Consequently, a decision whether to continue growing, remain the same size or even downsize is necessary. While inherent (growth-)path-dependencies often make it impossible to directly stabilize or reduce in size, the decision to continue growing is often automatically viewed as the only option. In tough times, of course, this is accompanied by still further increased risks for the company.

3.2 The Perception of Choice and Motives to Grow or not to Grow

In situations like these, entrepreneurs might follow some kind of growth automatism or they might start seeing growth as a matter of choice. Entrepreneurs who dealt intensively with their situations and the possible consequences of further growth eventually realized the choice aspect. They either renounced the next step of growth or formulated restrictive criteria for further growth.

Motives to do so can be related to the personal preferences of the entrepreneurs, entrepreneurial and organizational qualities and risks, relationships with employees, customers and business partners, and responsibilities towards nature and society. Some examples of motives to grow or not to grow are listed below:

Figure 3:   Motives to grow and not to grow (source: workshop group work)

However, companies who proactively decide not to grow are not necessarily post-growth contributors. Here, a distinction needs to be made between ‘growth-independence’ and ‘post-growth contributions’. Growth-independence is about making decisions that increase resilience against market dynamics and to secure the quality of products and services, processes or relationships. This is based on the idea that certain business decisions – both constitutive and situational – increase the dependency on business success and survival on infinite growth. To reduce growth-dependence, economic actors have to make changes in different decision areas such as ownership and equity, size and organizational complexity, quality development, relationships (with employees, customers, suppliers and other partners) as well as transparency and communication (see figure 4).

4. So are there Approaches “on the ground” which are in line with Post-Growth Principles?

Yes, there are SME as well as “alternative” economic actors which to different extents fulfil post-growth criteria. Above we mentioned specific decision areas in which changes are required for more growth-independence. These are also relevant for post-growth contributions. Figure 4 provides an overview of the questions to be decided in these areas, and the principles guiding the decisions depending on whether growth-independence or post-growth contributions are the focus. While we were discussing concrete examples and implementations in the workshop, this summary ends with the overview and a final note from us.

What is the type of world that we want to bring about? We encourage you all to publish papers and studies that elaborate examples of divergent pathways and possibilities. Our work can be performative and transdisciplinary. We have the capacity to reformulate the story told.

Dash, 2014, Toward an Epistemological Foundation for Social and Solidarity Economy

Gebauer, J. (under review). Towards growth-independent and post-growth-oriented entrepreneurship in the SME sector.