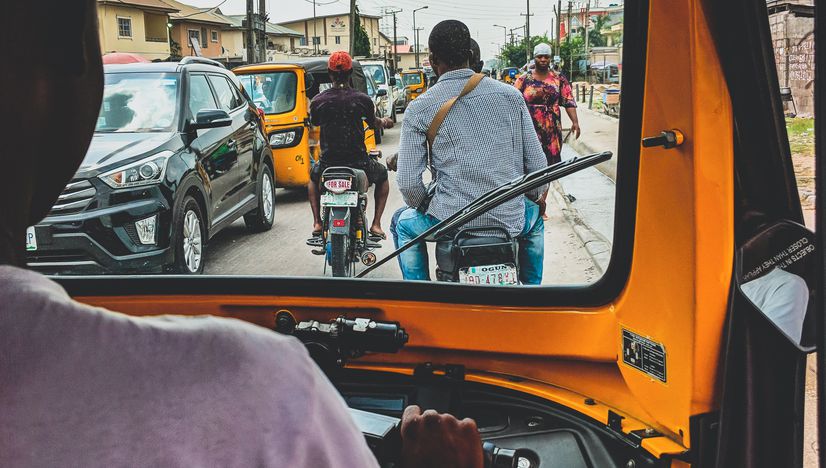 One of the major means of survival in Nigeria (picture by Joshua Oluwagbemiga)
Abdulkhalid Anda Salihu
Rethinking Economics The Uploaders (RETU), 2021
Level: beginner

This paper, published in March 2021, is an outcome of an online workshop that was organized by Rethinking The Uploaders (RETU) as part of the project " Solving the Major Economic Problem in Nigeria" (SMEPN), on the topic Unemployment: Policy Review and Recommendations. It explores the various unemployment policies introduced by the Nigerian Government and analyzes how effective they are and suggests some practicable solutions to solving unemployment problems in the country. The project is an output of the Global Pluralist Economics Training
(GPET). Do you want to take part in the next one, learn about pluralist economics and also learn how to host your own events? Find more information on Summer Academy for Pluralist Economics here.

According to the World Bank, unemployment refers to the share of the labor force that is without work but is available and seeking employment. The definition varies based on countries' dynamics and metrics for measurement but generally, the International Labor Organization definition is used. In Nigeria, the Nigeria Bureau of statistics categorizes an unemployed person as one who is part of the labor force who do not work for up to 40 hours per week within the reference week (the preceding week before measurement), another important concept is underemployment which in Nigeria refers to any individual who works for only 20-29 hours per week within the reference week. Unemployment differs in form as it could be structural; which implies a mismatch between what employers require and what potential employees possess in terms of skill set and education. On the other hand, unemployment can be frictional (that contributes to the natural rate of unemployment) which is the time lag between leaving a job and getting another while cyclical unemployment is driven by fluctuation in the business cycle.

Current State of Unemployment in Nigeria

Nigeria's population is estimated by the UN population department at 200 million people in 2020 which is dominated by youth within the age bracket of 15-34 years, indicating a young population. Nigeria Bureau of Statistics (NBS) second-quarter 2020 reports highlighted the unemployment rate at 27.1% up from the 23.1% recorded in Q3, 2018. With a labor force of about 80 million persons (11.3% lower in Q3'18), the largest portion 29.1% or 23,328,460 falls within the age bracket of 25-34. This means that young people are faced with the challenge of getting full-time employment hence either remain idle otherwise settle with menial, part-time, voluntary jobs which are of course regarded as either unemployment or underemployment based on the bureau benchmark. Although it is important to note that underemployment showed a gradual decline implying that the economy is actually creating employment but largely in the informal sector where the hours worked are not up to the benchmark for full employment but underemployment which is between 20-29 hour/weeks. The majority of jobs are created in the informal sector at 54%, the private formal sector accounted for 37%, and the 9% left were generated by the public sector all in 2013 (World Bank 2014).

It seems to be like a paradox that a country blessed with an abundance of crude oil, precious and base metals, fertile lands, favorable weather condition, a young population yet still battles with GDP growth, bags the poverty capital of the world, ranks low in the doing business index which stifles foreign and domestic portfolio and foreign direct investment and of course results in insecurity, banditry, and terrorism we see today.

Some Causes of Unemployment Include

There are various reasons for the persistent rise of unemployment/underemployment in the country. Some of which is due to the structure of the economy and the other due to “not so effective” reforms, policies, and strategies to tackle the problem. Andrew Nelvin, partner and chief economist at Price Water Coopers (PWC), highlighted the country's dependency on crude oil proceeds which restrict diversification, hence shut out employment opportunities in other yielding sectors. Also, the oil sector is industrialized thereby requiring less workforce compared to other sectors. Other reasons include population growth particularly the labor force (15-64 years) compared to low jobs created. The recent outbreak of coronavirus also contributed to job losses through the cut of global supply chains, the collapse of oil prices which dampened our foreign reserves led to exchange rates hike for a country that is import-dependent for consumables and raw materials making it difficult for firms to meet up, as a result, lay off workers. The deficient school curriculum is another reason; given the continuous changing environment in terms of industrial changes, advancement in technology, corporate technical skills, etc. which have created a skills gap, in other words, a mismatch between the supply side of labor (what employers require) and the demand side of labor (what potential employee possess) in terms of know-how and skill set. Not forgetting the lack of industries in the country to absorb qualified graduates. Most important to note is that lack of industries is among other reasons due to lack of sufficient infrastructure investment in Nigeria.

Several reforms, policies, and strategies have been put in place to address the problem of unemployment of which some were focused solely to tackle the problem head-on, a couple of them were indirect through poverty alleviation programs, and others were infused into national development plans. Some of the recent programs include Subsidy Reinvestment Program (SURE P), which was introduced in 2012 towards reinvesting savings accrued from fuel subsidy on critical infrastructure projects and social safety programs. The major objective of this program was to employ graduates through internship programs to reduce social vulnerability. Later in 2013 another initiative called University Entrepreneurship Development Programs (UNEDEP) to tackle graduate unemployment. It was initiated by the Ministry of Trade and Investment aimed at promoting self-employment among youth before their graduation from higher institutions of learning. Youth Enterprise with Innovation in Nigeria (YOU WIN), initiated in 2011, structured to finance outstanding business plans for young aspiring entrepreneurs in Nigeria. And then, the National Social Investment Program (NSIP) in 2017 is infused in the National Economic Recovery and Growth Plan (ERGP) and the recent trader money and N-power initiative. Despite these reforms, we still witness growing unemployment and underemployment in the country to which I blame largely to lack of a technical framework to achieve these reforms and secondly lack of continuity.

Investment in Human Infrastructure in Line with Science Technology Engineering and Mathematics (STEM).

A critical factor of every economy is the quality of its human capital. If well utilized it will accrue lots of prosperity for the country. Luckily, Nigeria does not only have a large population (Largest in Africa, 7th in the world) but a young population with a median age of 18. Since Science, Technology, Engineering, and Mathematics are drivers of innovation and digitization evidence from the Asian Tigers, If reforms are put in place to foster entrepreneurship within the framework of STEM channeled through the improvement of the educational sector, organizing STEM incubator programs, fellowships, and even scholarships, will help educate, equip and improve the quality of the labor force utilize. It's not enough to train the youth on STEM but further how it can be used to build wealth.

Unlocking the Potentials of the Informal Sector

Historically in Nigeria, the informal sector contributes about 41% to GDP and employs 68% of the labor force according to PWC Nigeria. Also, the NBS labor force report highlights a decline in unemployment for an individual with no formal education (22% in 2010, 18% in 2020). This is reflective that if the informal sector (SMEs) have improved access to funding, ease in doing business, not forgetting the role of competition in enhancing efficiency in the market, will thrive and create more jobs. On this basis I recommend reforms that will ensure ease in access to start-up and growth funding, ease in doing business reforms, a system to help mitigate risks these businesses may encounter, also providing non-contributory social safety net programs will help.

Role of the Private Sector

Of course, the government can't do it all, in developed nations, the private sector is the driver of employment. Private sector participation is very paramount if the problem of unemployment needs to be addressed. I'll borrow the ideology of Efosa Ojomo and Rich Alton in their paper "Avoiding The Prosperity Paradox". They proposed that developing economies can only grow, create jobs and reduce poverty by fostering prosperity through market-creating innovation by entrepreneurs as they create a market for non-consumers (individuals who cannot afford standard products or services for whom there always exists underlying demand). If entrepreneurs can break complex (big) products and services into affordable bits to create demand for non-consumers, this will spring up aggregate demand, firms earn more and can employ more hands.

The core role of the government

Economic theory suggests that businesses cannot thrive in an environment with poor infrastructure hence the need for economic, social, and institutional infrastructure in terms of power, good transportation networks, information technology, and strong legal frameworks. Research suggests that favorable infrastructure investment with either deficit or non-deficit financing has the potential to create jobs, directly and indirectly. In response to the current revenue shortage in Nigeria to fund infrastructure projects, the Government can adopt other sources of financing like a public-private partnership, blended finance; a mix of multilateral development institutions, and public sector financing which will then crowd-in private sector financing. As well as improve domestic resource mobilization.

All in all, as interesting as these policies, reforms, strategies, and frameworks may seem they are susceptible to poor implementation, therefore the need for sustainability, and sincere commitment from all stakeholders towards a better nation for all.