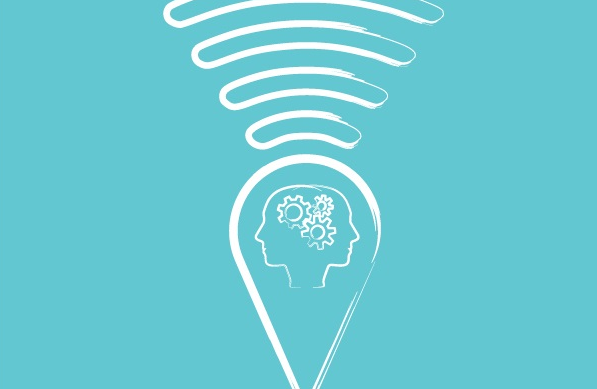 Granovetter’s work has the quality of the best social science: when you read it you immediately grasp its significance, to the extent that once you know it you wonder how you ever didn’t; over time you start to suspect that you always did, and you didn’t need Granovetter’s obvious papers to tell you anyway. He is the father of social network analysis, but within this he has made 3 distinct contributions, any of which would be worthy of recognition in both sociology and economics. These are Weak Ties, Threshold Analysis, and Embeddedness, and I’ll give thumbnail sketches of each of them before discussing what his work means for economics.

The Strength of Weak Ties 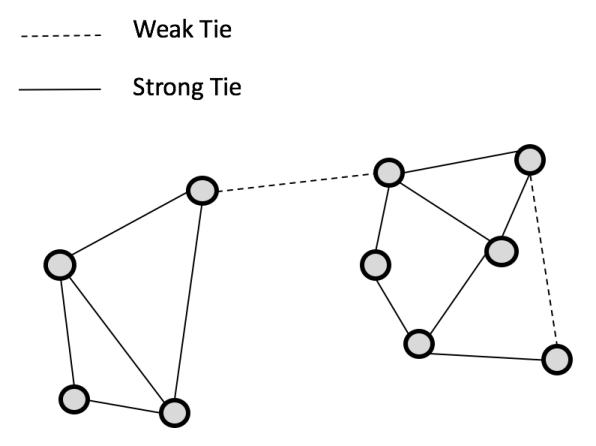 Granovetter’s first major contribution is one of the most cited social science articles of all time, clocking in at over 56,000 on Google Scholar. As the title suggests, the article focuses on what Granovetter terms ‘weak ties’: between acquaintances rather than friends; across firms; or across races and classes. The importance of these ties is that they may form a ‘bridge’ between two clusters of people (shown in the picture below) and therefore will be able to communicate novel information from one cluster to another. Strong ties between friends are less important because information will circulate more readily within a group: everyone in an office knows about the new vacancy in IT, but not about the vacancy in the office across town where you friend’s sister’s friend works. This basic insight spawned a vast literature on social network analysis which continues to this day.

In a reflection on the article 10 years later, Granovetter discusses empirical applications and tests of his work. It seems that weak ties are the most important for those in professional occupations when finding new jobs; for the working class and possibly the at the very top, strong ties dominate. The argument also has applications to racial integration of formerly segregated schools: rather than completely mixing a class, it might be better to have enough weak ties to connect cliques which are internally fairly homogeneous. One more example is the children’s care centre where, contrary to the norm, morale is high and staff turnover low. Their secret seems to be an unusual number of weak ties between staff.

Though the weak ties hypothesis is illuminating, it’s interesting to reflect on what the falsifiable implications of it are. Granovetter draws attention to those studies which he think tests the most important component of the hypothesis: that unique information is transmitted across weak ties. There are some very technical tests of this hypothesis in the literature,: for instance, that all ‘bridges’ between clusters should be weak ties – which is true in the above figure. Additionally, strong ties should be ‘transitive’ – friends of friends should also be your friends – whereas weak ties should not – acquaintances of acquaintances should not be your acquaintances. Both of these tests are borne out in the data.

More recent research, as summarised by the New York Times, has taken the hypothesis in a slightly different direction. People with more weak ties have higher self-reported happiness, empathy, and feelings of belonging. Furthermore, new opportunities often arise through weak ties – so perhaps pushing through those awkward conversations with your hairdresser is worth it. But before this turns into a self-help article, let’s move on to Granovetter’s second major contribution.

As a recent article about economics during the pandemic pointed out, economists often neglect non-linear effects in their models. Granovetter’s article on threshold analysis, though characteristically simple, could serve as a useful correction to this tendency. He supposes that people have varying degrees of proclivity toward some action – say, rioting – and will only do it if a certain number of people are already doing it. We could think of people as ordered from 0 up to 100: the 0s will always riot, even if nobody else is doing it; the 100s will never riot. But in-between these two extremes, most people will riot when enough others are – with what counts for ‘enough’ different for each person. Yet as more and more people riot, more and more people get drawn in, even those with higher numbers.

This leads to some interesting predictions. A given crowd may riot unless a single person – a 0 or a 1 – is taken out, thus breaking the chain reaction as the riot escalates. According to some basic calculations, if a given crowd is selected at random from people who are between 0 and 100, over 50% of the crowds will have no chance of a riot at all. Granovetter references evidence showing that adoption of family planning practices in rural Korean villages is best predicted by a threshold (as opposed to a standard linear) regression model. The threshold numbers corresponding to the theory are obtained by numbering the villagers according to the order in which they adopted the practice – the first person is a 0, the last a 100 - an imperfect procedure which nonetheless explains much of the data well. Granovetter also points out that his model could be applied to cases of contagion, with the numbers instead representing vulnerabilities to a given disease.

Become part of the community!

Exploring Economics is a community project. As an editor you can become part of the editorial team. You can also join one of the many groups of the international Curriculum Change movement.

The relationship between the economy and society is undeniable, but difficult to pin down theoretically. In a 1985 paper, Granovetter chides both economists and sociologists for their diametrically opposed approaches to this problem. Economists have traditionally taken an atomistic approach, proceeding from individuals acting on their own innate interests. Sociologists have instead chosen a structural approach, supposing that the behaviour of individuals is entirely determined by the environments they inhabit. Yet paradoxically, the two approaches share that behaviour is dependent on forces external to the model: in the case of utility-maximising individuals, these are personal preferences; in the case of socialised individuals, norms. Neither allow much room for the “distrust, opportunism, and disorder” which we all know pervades social and economic relations.

Granovetter makes the case that economic relations are best thought of as embedded in social networks within which trust and cooperation can be sustained. These networks can vary in the strength of their relationships, usually represented by having more connections between individuals. If everyone knows everyone, violations of norms and trust are much more likely to be detected and punished. Far from representing a simple breakdown of society, disorder is often characterised by competing networks of individuals subverting an existing institution: instances of fraud, heists and even wars all require groups with strong levels of trust to participate, or “honour amongst thieves” as Granovetter puts it.

The main case study of the paper is the behaviour of firms. Using an array of sociological evidence to support his case, Granovetter argues that businesses are characterised by dense social networks that operate within but also across firms, particularly at the executive level. He points out that actual litigation to settle disputes between firms is rare because such formal measures would mar established relationships – according to one researcher “you don’t read legalistic contract clauses at each other if you ever want to do business again”. Japan is noteworthy for its dense and  impenetrable (to foreigners) business relationships. But such networks are not limited to the top: people in the same profession often meet to gossip about market conditions, customers and of course, others in the profession – especially those who have failed in some way.

Granovetter’s explanations put him on a collision course with the ‘new institutional’ approaches to the firm of Ronald Coase and Oliver Williamson. Williamson’s view of the business world is one of “markets and hierarchies”, but Granovetter argues that the former – as envisioned by neoclassical authors – is basically a chimera, while the latter is far less effective at promoting desirable behaviour than they suppose. Instead, both intra- and inter-firm behaviour are characterised by webs of social relations of varying density, as epitomised by the regular nature of supposedly market relationships – repeat customers and suppliers – and also the relatively irregular nature of supposedly hierarchical relationships, with coalitions forming within firms that work against the hierarchy (the most obvious example being unions). Granovetter also dismisses pseudo-evolutionary explanations of firms as vehicles for enhancing efficiency and overcoming transaction costs – Coases’ argument - because the concrete mechanisms for such evolution are rarely discussed or evidenced, instead becoming “an article of faith”.

It would be excellent to see Granovetter’s work, and economics sociology in general, get more attention in economics. Sociologist Kieran Healy has joked that Granovetter should win the Economics Nobel Prize if only because of how many heads would explode. (The outrage of mainstream economists at a mere sociologist getting the Prize would be matched only by the outrage of heterodox economists at being disallowed their annual outrage at the Prize). The fact that Granovetter wrote a 2005 paper in the Journal of Economic Perspectives is some encouragement that he is being recognised, but I won’t hold my breath for more.