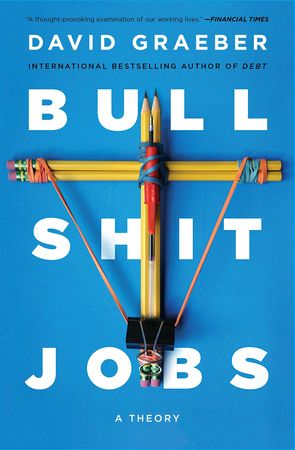 From bestselling writer David Graeber—“a master of opening up thought and stimulating debate” (Slate)—a powerful argument against the rise of meaningless, unfulfilling jobs…and their consequences. Does your job make a meaningful contribution to the world? In the spring of 2013, David Graeber asked this question in a playful, provocative essay titled “On the Phenomenon of Bullshit Jobs.” It went viral. After one million online views in seventeen different languages, people all over the world are still debating the answer. There are hordes of people—HR consultants, communication coordinators, telemarketing researchers, corporate lawyers—whose jobs are useless, and, tragically, they know it. These people are caught in bullshit jobs. Graeber explores one of society’s most vexing and deeply felt concerns, indicting among other villains a particular strain of finance capitalism that betrays ideals shared by thinkers ranging from Keynes to Lincoln. “Clever and charismatic” (The New Yorker), Bullshit Jobs gives individuals, corporations, and societies permission to undergo a shift in values, placing creative and caring work at the center of our culture. This book is for everyone who wants to turn their vocation back into an avocation and “a thought-provoking examination of our working lives” (Financial Times).

Graeber's book offers an insightful take on a very fundamental economic question: What is it that people work for? What is the purpose of labour? In updating the (philosophical core of the) labour theory of value, he identifies certain vocations that seem to lack any purpose. From this finding which Graeber backs with qualitative data, he moves on to explore the reasons for the proliferation of these kinds of jobs which he calls "Bullshit Jobs". It is a great, thought-provoking read because it continual-ly confronts the current state of affairs with their utopian potential where the amount of work can be reduced drastically because work has ceased to be a merit in itself. 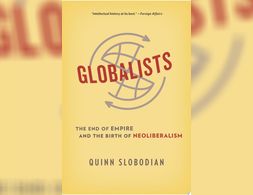 2020
Level: beginner
Globalists
In the first intellectual history of neoliberal globalism, Quinn Slobodian follows neoliberal thinkers from the Habsburg Empire’s fall to the creation of the World Trade Organization to show that neoliberalism emerged less to shrink government and abolish regulations than to deploy them globally to protect capitalism.
Quinn Slobodian
Harvard University Press