Rethinking Economics is an international network of students, academics, professionals and citizens building a better economics in society and the classroom.

Through a mixture of campaigning, events and engaging projects, Rethinking Economics connects people globally to discuss and enact the change needed for the future of economics, and to propel the vital debate on what economics is today.

Over the last 30 years, economics education has become increasingly narrow and detached from the real world. Lectures teach one perspective as if it is the only legitimate way to study the economy; seminars ask students to memorise and regurgitate academic theory; whilst exams award those able to solve abstract equations rather than engaging critically with the actual economy and real-world economic problems.

Economics degrees are characterised by a lack of critical thinking, a lack of alternative perspectives, a lack of real world application and a lack of ethical and political context.

This not only fails economics students but society as a whole. The economics graduates of today will become the policy-makers of tomorrow. But they are ill-equipped to deal with the most pressing problems of our time. Poverty, climate change and inequality are rarely mentioned in seminars, and when they are textbooks recommend the same tired old toolkit, with no opportunity to asses whether or not these methods are actually working. Please consider reading our manifesto for curriculum reform here, and signing it ! And / Or join our movement and become a REthinker too!

In a time where all our politicians seem to talk about is the economy, this is dangerous for democracy. In a poll of 1548 British adults we ran, in collaboration with Yougov in 2015, we found that only 12% of respondents found that economics was spoken about in a way that is easy and accessible to understand. Further to this, we found that only 39% of respondents could define Gross Domestic Product, 43% the Government Budget Deficit and 30% Quantitative Easing.

This lack of basic knowledge prevents individuals making informed democratic choices about which political party best represents them and it also inhibits them from positively articulating their views . However, when we asked whether people would like to know more about economics, only 13% of respondents said ‘no’ whilst 69% said ‘yes’, with some (34% and 21%) claiming time or resources were a barrier to their learning. Our Public Education project ‘Economy‘ is dedicated to overcoming those barriers, and to democratising economics. 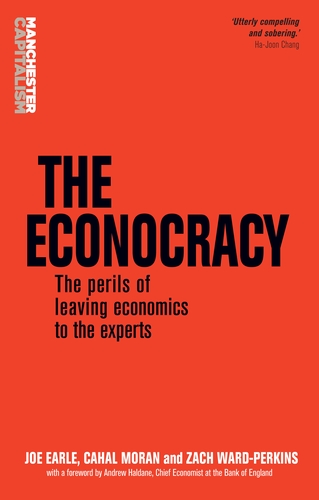 Three of our student organisers recently published a book entitled ‘The Econocracy: The perils of leaving economics to the experts’. After receiving some incredible reviews, being nominated in the Guardian/Observer’s book of the year, and now on it’s third print run, this book has seriously raised the profile of our organisation.  No wonder Noam Chomsky finds it “'An interesting and highly pertinent book.”

We are also publishing a pluralist textbook later this year with Routledge, so keep an eye out!

Ways to get involved with RE:

There are plenty of projects going on within our network at the moment. From writing a blog, recording a podcast, hosting an event or workshop, helping out with one of our committees (where you can help shape RE’s strategy), contributing to our pluralist cartoon series, joining up with your local group, or anything else that relates to critical, pluralist and/or understandable economics! Drop us an email at info@rethinkeconomics.org if you want to get involved!

Visit the Website of the international student movement Rethinking Economics.

Become a member of the international student movement Rethinking Economics.