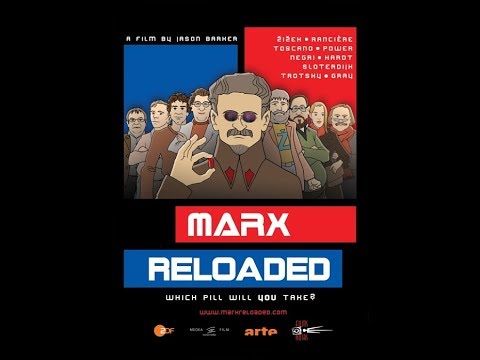 "Marx Reloaded" is a cultural documentary that examines the relevance of German socialist and philosopher Karl Marx's ideas for understanding the global economic and financial crisis of 2008—09. The crisis triggered the deepest global recession in 70 years and prompted the US government to spend more than 1 trillion dollars in order to rescue its banking system from collapse. Today the full implications of the crisis in Europe and around the world still remain unclear. Nevertheless, should we accept the crisis as an unfortunate side-effect of the free market? Or is there another explanation as to why it happened and its likely effects on our society, our economy and our whole way of life?

Today a new generation of philosophers, artists and political activists are returning to Marx's ideas in order to try to make sense of the crisis and to consider whether a world without or beyond capitalism is possible. Is the severity of the ongoing recession a sign that the capitalist system's days are numbered? Ironically, 22 years after the fall of the Berlin Wall, could it be that communism might provide the solution to the growing economic and environmental challenges facing the planet?

Written and directed by Jason Barker - an experienced writer, lecturer, translator and doctor of philosophy - "Marx Reloaded" comprises interviews with leading thinkers on Marxism, including those at the forefront of a popular revival in Marxist and communist ideas. Interviews with leading experts include: Norbert Bolz, Micha Brumlik, John Gray, Michael Hardt, Antonio Negri, Nina Power, Jacques Rancière, Peter Sloterdijk, Alberto Toscano, Slavoj Zizek. The film also includes interviews with leading skeptics of this revival as well as light-hearted animation sequences which follow Marx's adventures through the matrix of his own ideas.

In their works, Michael Hard and Antonio Negri have worked out how capitalism has developed towards a revaluation of immaterial goods and services and believe that they can derive from this a kind of common good in the sense of knowledge and universally available information, a quasi emancipatory power of immaterial labor, with which the system can be overcome. Alberto Toscano, on the other hand, finds that this development is not accompanied by a lower rate of exploitation, because the employment relationship continues to offer social conflict material even in the execution of immaterial, cognitive work.

Jacques Rancière, on the other hand, emphasizes the stability of extremely wealth-inequal societies and finds that the logic of exploitation does not automatically lead to its end. In view of the crisis-proof nature of perpetual capitalism, Herfried Münkler refers to Joseph Schumpeter, who described crises as a process of creative destruction in which the capitalist system has always been rejuvenated. Michael Hardt also agrees with the argument when he speaks of the paradox of the function of capital in its constant collapse. In the phase of collapse there would be the possibility to re-concentrate or re-order capital.

For Slavoj Zizek, the thesis seems relevant that one has to forget the real-socialist fundus, the social-democratic model of the post-war years as well as councillor-democratic considerations in order to be able to find ways out of the capitalist crisis cycles. For Micha Brumlik, however, democratic ways out of capitalism are more than appropriate in view of the history of the 20th century, and civil society pressure on party democracy is necessary. To this end, according to Rancière, it is logical to understand the participation of all (excluded) people in this multi-layered political negotiation process as the supreme maxime of emancipatory action in the sense of equality in the here and now.

Negri concludes by stating that, in his view, socialism is a form of management of capital similar to that of liberalism and communism is nothing of the sort, whereas Nina Power defends the idea of communism against the fact that many people are able to imagine the end of the world, but not the end of capitalism.

Zizek finally places his hope in the anti-capitalist potential of knowledge, while Peter Sloterdjik likes to see the principle of mutual insurance (immunism) as a central way out of consumer society with its ecological consequences and to precede the possible achievement of a communist, solidary way of life.

An elaborate film about Marx's central themes and arguments with contemporary issues as examples, the documentary captures views from a range of European academics on the relevance of Marx's theories in the mutated versions of capitalism as we see today. There are multiple references to the Wachowski's The Matrix in the documentary, which is quite telling of the depth, density and complexity of the issue at hand.

The title of the film may discourage some but this would be helpful for anyone to understand how the tiny things in our daily lives are related to each other and are predominantly mediated by the sheer endless exchange and circulation of commodities and money.

Regarding one of the opening statements, it is worth to reconsider Eamon Butler's reading of the causes of the world financial crisis as rather problematic when he suggests that money is a monopoly of the state and that key interest rates were and are being kept artificially low in order to stimulate the economy to the point of overheating — this may be a plausible explanation for the years immediately preceding the financial crisis, but it is no longer tenable since this great crash empirically. After all, since 2008/09, the interbank market has come to a standstill and spawned an even larger shadow financial market in which repos, so-called repurchase agreements, which in turn are based mainly on safe government bonds, have massively supported a new private security structure: states with their central banks as well as the shadow banking system have thus willingly or unintentionally created an enormous intertwining of financial flows. Central banks are now faced with the dilemma that an increase in key interest rates would mean a fall in bond market prices and thus, in the final analysis, would be in such a scenario responsible for a collapse of the shadow banking system (or, presumably, of the system as a whole). So in some sense the central banks' hands are tied with respect of returning to more conventional policy measures and are likely to continue to expand their unconventional open market operations to safeguard their respective mandates. More meaningful financial regulation may be needed to stabilise and resume further economic activity (within planetary boundaries) contrary to Butler's ideological demands of financial deregulation (what constituted another root cause of the world financial crisis in the first place).