Ecological Rationality – Intelligence in the World 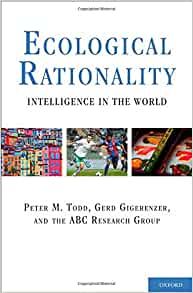 Ecological Rationality, intelligence in the world.

"More information is always better, and full information is best. More computation is always better, and optimization is best." More-is-better ideals such as these have long shaped our vision of rationality. Yet humans and other animals typically rely on simple heuristics to solve adaptive problems, focusing on one or a few important cues and ignoring the rest, and shortcutting computation rather than striving for as much as possible. In this book, we argue that in an uncertain world, more information and computation are not always better, and we ask when, and why, less can be more. The answers to these questions constitute the idea of ecological rationality: how we are able to achieve intelligence in the world by using simple heuristics matched to the environments we face, exploiting the structures inherent in our physical, biological, social, and cultural surroundings.

In this book, Peter M. Todd and Gerd Gigerenzer show that rationality is both a mental and environmental phenomenon. Unlike neoclassical and most of behavioral economics which see gut decisions (heuristics) as lazy and wrong behavior in making choices, this book proves that, in the right environment, a heuristic can be better than probability theory, optimization, or other complex strategies. Gigerenzer explains that according to ecological rationality, the best method of rationalizing (for example a heuristic shortcut versus weighing and adding all complex probabilities in a model) would depend on the fit between the following three considerations:

(1)The person making the choice, for example, the individual’s experience in the situation.

(2) The culture, for example, what conventional methods there are for dealing with this situation;

(3) The type of world the choice is made in, for example, a deer freezing in front of a car’s headlights is a bad heuristic, probably because cars are not part of the deer’s usual world and it has no built-in heuristic to deal with it.

Rationality is seen as the intelligent, adaptive behavior that emerges from the interaction of both the mind and the world. The focus is not on fixing so-called biased agents who deviate from neoclassical risk probability equations but rather on explaining when each approach works best.

No pluralist discussion on rationality would be complete without the contributions of Ecological Rationality. Students might be familiar with perfect rationality and its use of probability calculus, students might even be familiar with behavioral economics and its use of cognitive psychology, however, this book brings us closer to a type of rationality that is ecologically relevant. Gigerenzer also admits the need to flesh rationality out further by focusing on the person, the culture, and the world to look at how a person or culture's adaptive tools on rationality will change over time, to design tools that experts can use to make better decisions and to further strengthen the foundations of rationality in ecology.