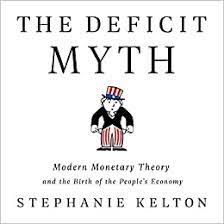 The leading thinker and most visible public advocate of modern monetary theory -- the freshest and most important idea about economics in decades -- delivers a radically different, bold, new understanding for how to build a just and prosperous society. Stephanie Kelton's brilliant exploration of modern monetary theory (MMT) dramatically changes our understanding of how we can best deal with crucial issues ranging from poverty and inequality to creating jobs, expanding health care coverage, climate change, and building resilient infrastructure. Any ambitious proposal, however, inevitably runs into the buzz saw of how to find the money to pay for it, rooted in myths about deficits that are hobbling us as a country. Kelton busts through the myths that prevent us from taking action: that the federal government should budget like a household, that deficits will harm the next generation, crowd out private investment, and undermine long-term growth, and that entitlements are propelling us toward a grave fiscal crisis. MMT, as Kelton shows, shifts the terrain from narrow budgetary questions to one of broader economic and social benefits. With its important new ways of understanding money, taxes, and the critical role of deficit spending, MMT redefines how to responsibly use our resources so that we can maximize our potential as a society. MMT gives us the power to imagine a new politics and a new economy and move from a narrative of scarcity to one of opportunity.

The main objective of this book is to refute, from the point of view of the Modern Monetary Theory (MMT), six of the most widespread myths (or fallacies) in conventional economics regarding the fiscal deficit. First of all, it is refused how and why a Federal Government should not design its budgets like if it was a household or a family. The second myth is that deficits are evidence of overspending, which is not totally correct. Thirdly, it is commented on the fallacy of how the deficits are a burden for future generations. The forth myth is about the concept of crowding-out in private investment and, according to Kelton, how deficits can actually rise private savings and even attract new investments. Immediately, the possible foreign dependence of USA is discussed and how the possession of American debt by China and Japan affect the decision-making in American politics. And, finally, the sixth myth is that the costs of socio-economic rights (Social Security, Medicare, Medicaid, and so on) end up in fiscal crisis and defaults in the long term. Once those myths have been addressed, the focus of the book is on fighting socio-economic problems such as child poverty, the lack of infrastructures, inequality, decreases in wages, and so on. Lastly, the prescriptive pillar of MMT is presented, known as Job Guarantee, with which a true full employment situation is deserved to achieve, although this national job guarantee is seen as a partial solution. In summary, the main conclusion of the book is that MMT shows that, if the necessary real resources are available (infrastructures, jobs, and so on), there will always be money available to meet the objectives set from the political agenda, counting on indispensable monetary sovereignty.
Tags: Deficit | job guarantee | MMT | Myth