✕
Home Discover Marx, Capital and the Madness of Economic Re…

Marx, Capital and the Madness of Economic Reason

Marxist scholar David Harvey explains key concepts of capital from Marx. Applying Marx's analysis of capital to our economic system and today's world Harvey demonstrates both the longevity and relevance of Marx's Capital, 150 years after its publication.

David Harvey (@profdavidharvey) is a Distinguished Professor of Anthropology at the City University of New York Graduate School. His course on Marx's Capital, developed with students over thirty years, has been downloaded by people from all over the world.

As Harvey explains in the introduction to his book The Limits to Capital, his approach has for some time been to "fill in the gaps" to Marx's writing, while at the same time applying them to our current society. This lecture places the focus on the notion of capital as it exists today and the consequences this has for society and nature.  An interesting point which Dr Harvey addresses is this lecture is the inclusion of nature when thinking about the wants and needs of society. Too often, nature is included specifically in environmental economic discussions, but missing when discussing the economy as a whole.

Go to: Marx, Capital and the Madness of Economic Reason 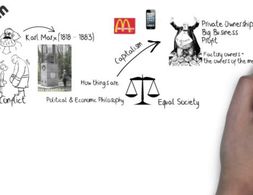 2013
Level: beginner
A Brief Introduction to Marxism
This presentation looks at the basic idea of Marxism, specifically the conflict between the different classes in society.
The Curious Classroom
YouTube 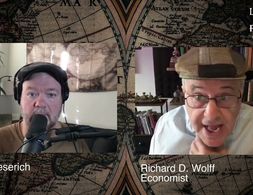 2022
Level: beginner
Richard Wolff On Everything You Need to Know About Inflation
Mitch Jeserich interviews Professor Richard D. Wolff, a professor of economics at the New School University, who presents an explanatory theory of how inflation occurs in an economy. This analysis is presented through the lens of Marxian political economy (explicitly) and institutional economics (implicitly through corporate structure). Check out this new content in our discover section! posted 08.06.2022
Richard D Wolff
Letters and Politics