Home Discover Everything You Need to Know About the New Ec…

Everything You Need to Know About the New Economy 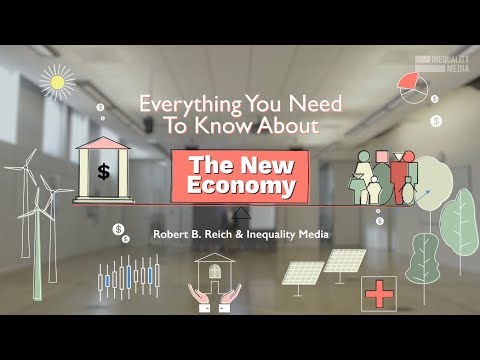 At first, Peter Reich illustrates in this short presentation the main cause of widening inequality (i.e. imbalance of  “countervailing power” based on John K. Galbraith)  in the USA since the 1970's. As the author mention that the story of economics isn't about supply and demand, but about institutions and politics, he invites us to use the lens of power in order to understand the dynamics of american capitalism.

In order to respond to the dominance of big money and to reorganize a new market from which the majority of the population benefits, the author introduces the concept of progressive populism and explore the ways in wich we can create a new progressive economics through 4 steps :

2) Building a Multi-racial, Multi-ethnic, Coalition of the Middle Class, Working Class, and Poor to re-organize the market where wealth is more equally distributed.

3) Offering a compelling set of ideas about what should be done with countervailing power.

4) Building the leadership for this new countervailing power

In the end the goal is building a system that works for the many.

Institutionalist thought is paramount in this presentation. The institutionalist ontology of domination is reflected in the dominance of big money over politics. Thus, policy incentives to drive economic development toward the top 1% are the socio-economic gangrene of American society wich have caused the imbalances of power. In this context, we have the development of an economic thought that rejects the classic dogmas of the free market and brings the need to reconsider the institutions. The next problem will be money, the way it is formed and its circulation in the economy. The author's proposals such as basic income or progressive property taxes are considered current solutions, but in the long run the sustainability of the whole system will be determined by the way the most powerful institution, money, is designed.

Go to: Everything You Need to Know About the New Economy