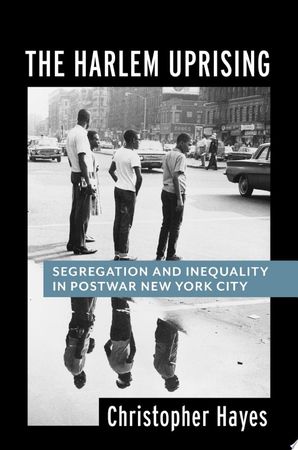 In July 1964, after a white police officer shot and killed an African American teenage boy, unrest broke out in Harlem and then Bedford-Stuyvesant. Protests rose up to call for an end to police brutality and the unequal treatment of Black people in a city that viewed itself as liberal. A week of upheaval ensued, including looting and property damage as well as widespread police violence, in what would be the first of the 1960s urban uprisings. Christopher Hayes examines the causes and consequences of the uprisings, from the city’s history of racial segregation in education, housing, and employment to the ways in which the police both neglected and exploited Black neighborhoods. While the national civil rights movement was securing substantial victories in the 1950s and 1960s, Black New Yorkers saw little or uneven progress. Faced with a lack of economic opportunities, pervasive discrimination, and worsening quality of life, they felt a growing sense of disenchantment with the promises of city leaders. Turning to the aftermath of the uprising, Hayes demonstrates that the city’s power structure continued its refusal to address structural racism. In the most direct local outcome, a broad, interracial coalition of activists called for civilian review of complaints against the police. The NYPD’s rank and file fought this demand bitterly, further inflaming racial tensions. The story of the uprisings and what happened next reveals the white backlash against civil rights in the north and crystallizes the limits of liberalism. Drawing on a range of archives, this book provides a vivid portrait of postwar New York City, a new perspective on the civil rights era, and a timely analysis of deeply entrenched racial inequalities.

In this interesting take, the author, Christopher Hayes, explores the reasons for uprisings in the African American neighborhoods in New York City post the second world war in the 1960s. He ascribes these uprising to racial inequalities in various economic opportunities, including housing, schools, jobs, and policing. In this gripping and detailed account, the book explores how those in power have refused to address structural racism, while also examining the limits of liberalism.

Level: mittel
2020
From Here to Equality
William A. Darity Jr., A. Kirsten Mullen The University of North Carolina Press