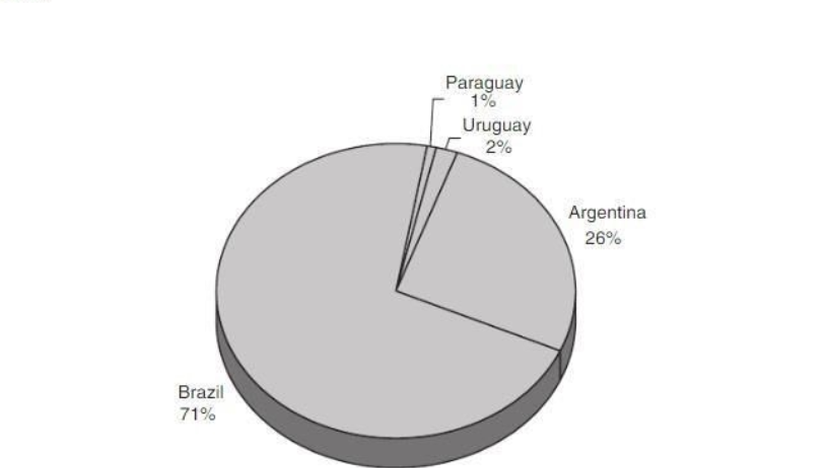 Introduction: What is Mercosur?

MERCOSUR (Mercado Común del Sur or Common Southern Market) was the first formalized attempt to integrate South American countries economically and politically. The negotiations started in 1991 but the integration talks were initiated in 1985 between Argentina and Brazil due to the large volume of trade their countries were having. Mercosur was highly successful in achieving its goals in the first few years after it was implemented but contextual factors affected member countries which made the bloc decrease its unification. According to Mercosur’s official main press, its main objective was to

“increase the efficiency and competitiveness of the all member economies by opening markets, promoting economic development in the framework of a globalized world, improving infrastructure and communications, making better use of available resources, preserving the environment, generating industrial complementation and coordinating macroeconomic policies. Achieving a common external tariff is one of the main goals of the block.” (MercoPress n.d.).

The original member countries were Argentina, Brazil, Paraguay, and Uruguay but as of November 2018, the member countries that have been added are Bolivia and Venezuela with the rest of the South American countries as associate states. The Asunción Treaty in 1991 and the Ouro Preto Protocol of December 1994, established different entities that were to govern Mercosur and its member countries.

A paper from 1996 claims Mercosur to have “advanced farther and more smoothly than could realistically have been anticipated.” (Azambuja 1996). The same paper explains that one of the reasons why the negotiations were settled fast and every country got on board quickly was because of the incomplete customs union:

“…with each member being allowed to set up, for a limited period of time, a substantial list of exceptions, ample enough to safeguard its fundamental concerns but not so wide to make the concept of a customs union empty of real meaning and validity.” (Azambuja 1996)

The aims and structure that were stated both in 1991 and 1994 were set up to promote inter-regional trade and growth but seemed unachievable given the member countries’ previous economic slump. However, from 1991 to 1999, intra-regional trade in the bloc went from 8.9% to almost 25% (Campos 2016). However, the turn of the century brought problems to Mercosur as certain factors prevented the integration project from fully flourishing into a stable integrated economic bloc.

In this essay, I will explain the main hindrances that Mercosur has had which include the size of the economies, economic shocks, and the lack of supranational committee. I will also provide a policy recommendation to solve these problems by revising its original goals, building a supranational committee, and re-designing the administrative structure.

Since its establishment, Mercosur has had many drawbacks and complications that have made it hard to successfully establish itself as a strong integrated bloc.

There is a very clear difference in the size of the economies between member countries, with Brazil being the obvious leader. Argentina is treading not far behind, but Paraguay and Uruguay’s economies are very small in comparison which makes it hard for their representatives to have a heavily weighted opinion on issues (Figure 1). This is not because the power structure designed for Mercosur does not give all the countries a place to state their opinion but because their economies do not have leverage in the bloc to make an economic difference. Brazil is the strongest state in the bloc, and according to Campos “it was state leaders that formed Mercosur” (Campos 2016). 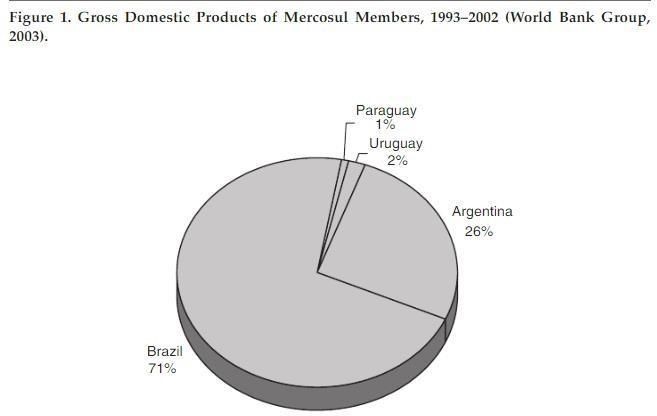 The Argentinian and Brazilian economic crises at the turn of the century were very important in shaping the evolution of Mercosur.As previously mentioned, these are the countries with the strongest economies in the blockso in case of an economic crisis, an inevitable domino effect would fall upon the other member countries. However, they both still have a “high dependence on highly mobile international finance capital” (Carranza, 2003).

In 1999 and 2001, the Brazilian currency (Real) had large devaluations which inevitably caused Brazil’s exports to be extremely competitive compared to neighboring countries. This almost caused Argentina to establish a tariff on Brazilian goods as their own industries were starting to see losses. This was the first time a member country would have gone against the Mercosur rules and, due to the lack of a formal-decision making body with competence to prevent Argentina from doing this, it could have happened. There is no entity in the Mercosur organs that has the responsibility to prevent this, and there wouldn’t have been any consequences if Argentina imposed this tariff either.

The total collapse of the Argentinian economy in 2001 affected the trade bloc severely as well as on Uruguay, which saw its economy collapse just a few months after it hit Argentina. The crisis affected Argentina’s economy to such an extent that in 2002, the member country requested to suspend the customs union for a few months, so they could boost their economy and prevent a further economic disaster that would eventually also affect Brazil.

The outcome of these crises for both countries were very different because their macroeconomic policies were opposite. Whilst Argentina had a government that had their currency at a fixed rate against the dollar, Brazil had a free floating one. This provided more favourable circumstances for foreign investors to come to Brazil and reboot its economy again, establishing again its leadership in the bloc.

This was the first time Mercosur had to deal with a crisis, and is still affected by it.

Without a council to establish the decision making competencies when a conflict arises, states are not obliged to comply with the established rules. Member countries can do what they want according to the amount of leverage they have on the economic bloc. At the times of the crisis, there were no procedures for ensuring implementation over arbitrary decisions, the disputes were, and still are, handled through diplomatic channels and not through a Mercosur entity.

As illustrated by the example of the economic crisis, a main issue that Mercosur has is the inability to establish a supranational committee that controls the integration of the group. This responsibility is then naturally given to the economic leader of the bloc, Brazil. Brazil has been able to get their country’s economy back on track after the crisis and was also able to help its neighbours. Through economic policies and diplomatic relationships, Brazil has helped Argentina recover from economic crises and Brazil has also helped defeat an attempted political coup in Paraguay (Genna and Hiroi, 2003). Since the beginning of the 21st century Brazil has reaffirmed its position as the leader and it has been hard to take that power away. According to Campos, Brazil’s leadership “was and continues to be crucial in shaping the integration in Latin America (…) influenced by the national gains, both economic and political.” (Campos 2016)

Moreover, “Between 1998 and 2003, only 9 of the 201 cases filed for dispute settlement in Mercosur were solved through Mercosur- institutionalized mechanisms.” (Campos 2016).

There is no effective organ that can control the disputes that arise. Moreover, the institutions that have been established since 1991 have not changed. Thus, these institutions do not affect the way MERCOSUR works in any given way. Lastly, the lack of a system that settles conflicts between members was clearly seen when Venezuela was added to the integrated bloc. After certain human rights violations in the country, some members of the bloc wanted to suspend Venezuela’s membership. This was not achieved or even voted on because there was one country that did not support the expulsion, and the Venezuelan foreign minister did not accept being expelled and kept attending meetings.

What could also be appreciated in the previous explanations is the “incomplete customs union” established in 1991 that was supposed to be temporal. However, each country kept its own external tariff on the bloc even though other member countries wanted to change this. As every country kept their own tariffs with other countries, no one was willing to decrease them.

This defeated the whole point of the customs union, as it was expected that countries should had adapted their industries over time and would be able to open their trade tariffs freely.

Moreover, MERCOSUR tends towards an outward look rather than an inward one. The member countries and leaders are more concerned with the external political relations that they have than their own administrative structures and procedures. As mentioned before, Brazil is the leader of the group and in 2010 its economy was thriving, placing it as the 7th largest economy in the world. Brazil was able to do this without any help from the relationships or trade benefits that MERCOSUR could provide, so the agreement wasn’t a priority for the country’s politics anymore. As much as the bloc would benefit from a supranational entity to control its workings, Lula Da Silva, Brazil’s president at that time, clearly stated in 2007 “Each country is entitled to their sovereignty, and sovereign decisions are untouchable.” (da Silva 2007)

The lack of a supranational committee is clearly seen when there are no neutral entities that can solve disputes, making it hard to mediate the problems that arise. It is also seen in the “incomplete customs union” drafted in 1991 that was never reassessed. Lastly, the integration project has more of an outward look in the way that they deal with the rest of the world than one that focuses on their internal organization, which makes it hard to solve.

MERCOSUR has been a work in progress for almost 30 years now. Even though it might look good on paper, there are clear obstacles preventing it from flourishing as an integrated economic and political trade bloc as it was shown in the previous section. After analyzing the main problems, these are the recommended policies:

It is very important to update the original goals that MERCOSUR had to current times and current circumstances. Having the old goals in place means that the integration project is set to fail as it is very unrealistic to try to achieve goals that were set almost 30 years ago. A new meeting must be held to obtain the expectations from member countries and decide what the next steps are. By changing the objectives of MERCOSUR and breaking them down to achievable, small-term goals, the integration plan might be achievable.

The different MERCOSUR bodies were outlined very clearly in the 1991 and 1994 treaties that were drafted. However, as Mercosur went through fluctuations, the bodies that were in place did not have significant outcomes. The institutions in place did not make decisions but rather, it was the diplomatic ties between countries that made this happen. The proposed redesign should start from the beginning, in conjunction with the goals.

The supranational committee is very important to settle disputes so they can be solved as objectively as possible. If the supranational committee is set up, the power differences that currently exist between Mercosur countries with Brazil leading it, will cease to exist. This will happen because the committee will be able to contain Brazil’s leverage power within the member countries. This committee will directly help with the communication as representatives can explain what they want to get out of an agreement and a consensus can be reached.

Campos, Gabriela Lomeu. 2016. «From Success to Failure: Under What Conditions Did Mercosur Integrate.» Journal of Economic Integration 855-897.