Making the Modern Slum – The Power of Capital in Colonial Bombay 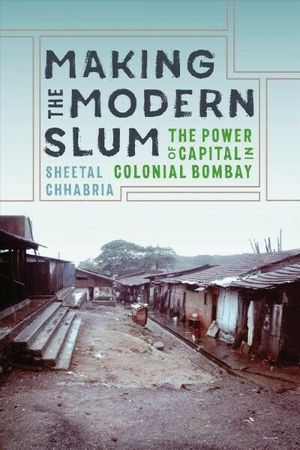 In the late nineteenth and early twentieth centuries, Bombay was beset by crises such as famine and plague. Yet, rather than halting the flow of capital, these crises served to secure it. In colonial Bombay, capitalists and governors, Indian and British alike, used moments of crisis to justify interventions that delimited the city as a distinct object and progressively excluded laborers and migrants from it. Town planners, financiers, and property developers joined forces to secure the city as a space for commerce and encoded shelter types as legitimate or illegitimate. By the early twentieth century, the slum emerged as a particularly useful category of stigmatization that would animate city-making projects in subsequent decades. Sheetal Chhabria locates the origins of Bombay’s now infamous “slum problem” in the broader histories of colonialism and capitalism. She not only challenges assumptions about colonial urbanization and cities in the global south, but also provides a new analytical approach to urban history. Making the Modern Slum shows how the wellbeing of the city–rather than of its people–became an increasingly urgent goal of government, positioning agrarian distress, famished migrants, and the laboring poor as threats to be contained or excluded.

This book presents a novel approach to histories of colonial urbanisation and to the study of the cities of the Global South by historically tracing the making of the Bombay slums. It delineates the official discourse on city development which emerged and ossified during times of intense crisis – the recurrent famines and later the bubonic plague – that gripped the surrounding hinterlands and the city and in the late nineteenth and early twentieth century. Comprising seven chapters, the book sifts through detailed archival records to argue that these crises were the central moments around which the politics of inclusion and exclusion was shaped through a confluence of interests of the colonial administration and those of the local city elites. The project of city-making in a colonial underdeveloped context thus became one of defining what the city was by defining what it wasn’t, placing the city itself above those who created it. These official classifications problematised and excluded not just a vast majority of the city’s working-class but also categorised and excluded industrial, spatial, architectural features that were perceived as “not quite city like”. Through the process of official categorisations and classifications, inclusions, and exclusions, the official project of city-making created its “internal other” – the Bombay slums. This, in turn, ensured a poorer working class and higher capital accumulation for the elites.

This book is an interesting read for not just those interested specifically in the colonial history of  Bombay, but even those who want to understand the “deviant” development of the cities of the Global South.