Accueil Étudier Books In Defense of Post-Keynesian and Heterodox Economics 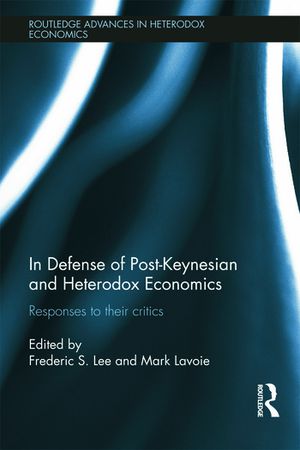 Post-Keynesian and heterodox economics challenge the mainstream economics theories that dominate the teaching at universities and government economic policies. And it was these latter theories that helped to cause the great depression the United States and the rest of the world is in. However, most economists and the top 1% do not want mainstream theories challenged—for to do so would mean questioning why and how the 1% got where they are. Therefore, numerous efforts have been and are being made to discredit if not suppress Post-Keynesian and heterodox economics. These efforts have had some success; this book is a response to them. This book makes it clear that Post Keynesian/heterodox economics is, in spite of internal problems, a viable and important approach to economics and that it should resist the attempts of the critics to bury it. The reader will also find arguments that directly engage the critics and suggest that their views/criticisms are vacuous and wrong. As such, this will appeal to all who are interested in economic theory, economic history and who believe in challenging the orthodoxy.
Tags: economic theory | heterodoxy | mainstream economics | pluralism | post-keynesianism