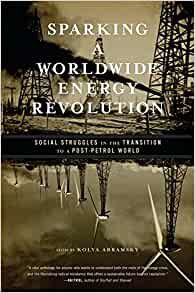 As the world's energy system faces a period of unprecedented change, a global struggle over who controls the sector--and for what purposes--is intensifying. The question of "green capitalism" is now unavoidable, for capitalist planners and anti-capitalist struggles alike. From all sides we hear that it's time to save the planet in order to save the economy, but in reality what lies before us is the next round of global class struggle with energy at the center, as the key means of production and subsistence. There are no easy answers in this battle for control of the world's energy system. Sparking A Worldwide Energy Revolution is not a book of sound bites. It unpacks the seemingly innocent terms "energy sector" and "energy system" by situating the current energy crisis, peak oil, and the transition to a post-petrol future within a historical understanding of the global, social, economic, political, financial, military, and ecological relations of which energy and technology are parts. The authors probe the systemic relationships between energy production and consumption and the worldwide division of labor on which capitalism itself is based--its conflicts and hierarchies, its crisis and class struggles. With over fifty chapters written by contributors from approximately twenty countries, Sparking A Worldwide Energy Revolution forms a collective map of the most dynamic struggles within the energy sector. Kolya Abramsky is a former visiting fellow at the Institute of Advanced Studies in Science, Technology and Society, in Graz, Austria, where he received the Manfred-Heindler Award for Energy and Climate Change Research, and in 2006 was coordinator of the Danish-based World Wind Energy Institute, an international effort in non-commercial renewable energy education, involving different renewable energy centers from around the world. ursuing a PhD in sociology at State University of New York, Binghamton.

This book is a collection of essays written by economists from all over the world who paint a stark reality of the energy crisis. Abramsky reiterates that there's no basis for us to believe that renewable energy and regulatory frameworks will get us out of this mess, because the energy crisis is truly part of a wider crisis of social relations. Abramsky provides a context for us to understand these social struggles, especially as it relates to the ownership of energy infrastructure in a country. Abramsky encourages us to see the importance of grassroots effort in the just energy transition.

2020
Level: debutante
The Costs of Inequality in Latin America
This book highlights the political economy of wealth and income inequality in Latin America. The author segments his analysis to separately evaluate the economic, social, and political costs of inequality building on country case studies. It draws well-contextualized lessons from the Latin American experience that is important to consider for other regional contexts, especially for social policies of nations within the 'Middle Income Trap'.
Diego Sánchez-Ancochea
Bloomsbury Academic