Border and Rule – Global Migration, Capitalism, and the Rise of Racist Nationalism 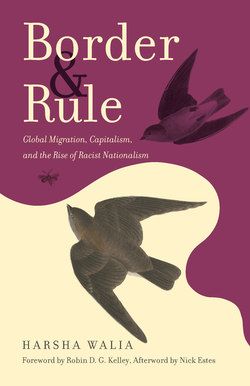 In Border and Rule, one of North America’s foremost thinkers and immigrant rights organizers delivers an unflinching examination of migration as a pillar of global governance and gendered racial class formation. Harsha Walia disrupts easy explanations for the migrant and refugee crises, instead showing them to be the inevitable outcomes of the conquest, capitalist globalization, and climate change that are generating mass dispossession worldwide. Border and Rule explores a number of seemingly disparate global geographies with shared logics of border rule that displace, immobilize, criminalize, exploit, and expel migrants and refugees. With her keen ability to connect the dots, Walia demonstrates how borders divide the international working class and consolidate imperial, capitalist, and racist nationalist rule. Ambitious in scope and internationalist in orientation, Border and Rule breaks through American exceptionalist and liberal responses to the migration crisis and cogently maps the lucrative connections between state violence, capitalism, and right-wing nationalism around the world. Illuminating the brutal mechanics of state formation, Walia exposes US border policy as a product of violent territorial expansion, settler-colonialism, enslavement, and gendered racial ideology. Further, she compellingly details how Fortress Europe and White Australia are using immigration diplomacy and externalized borders to maintain a colonial present, how temporary labor migration in the Arab Gulf states and Canada is central to citizenship regulation and labor control, and how racial violence is escalating deadly nationalism in the US, Israel, India, the Philippines, Brazil, and across Europe, while producing a disaster of statelessness for millions elsewhere. A must-read in these difficult times of war, inequality, climate change, and global health crisis, Border and Rule is a clarion call for revolution. The book includes a foreword from renowned scholar Robin D. G. Kelley and an afterword from acclaimed activist-academic Nick Estes.

Framing borders as an instrument of capital accumulation, imperial domination, and labor control, Walia argues that what is often described as a “migrant crisis” in Western nations is the outcome for the actual crisis of capitalism, conquest, and climate change.  This book shows the displacement of workers in the global south due to, in many cases, the implementation of structural adjustment policies. Walia argues that borders are managed through exclusion, diffusion, commodified inclusion, and discursive control, which also hinders labor solidarity, by creating additional precarity among and differentiation from migrant workers. The book builds up to argue for a bold no border policy as well as the dismantling of the “political ideology of liberalism, the economic dogma of neoliberalism, and right-wing nationalism” that are built into and facilitated by borders.