Inicio Descubrir The Role of Women in the Fourth Industrial...

The Role of Women in the Fourth Industrial Revolution 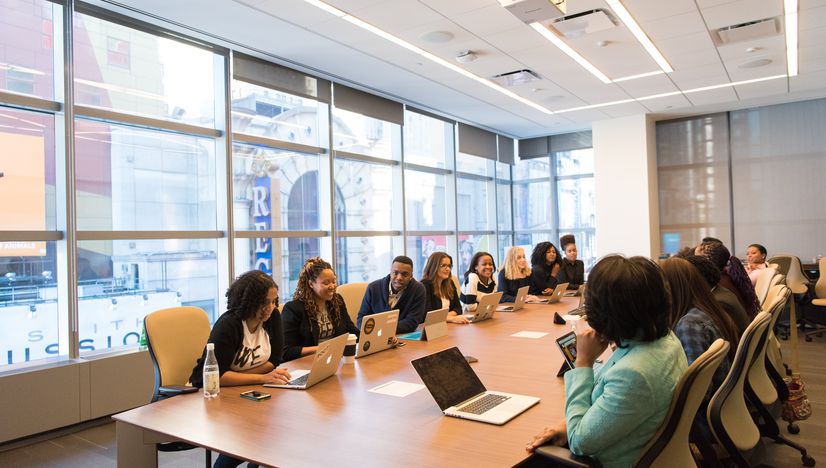 The Role of Women in the Revolution

This is an essay of the writing workshop Nigeria’s Readiness for and the Effect of the Fourth Industrial Revolution, published July 2020

The Fourth Industrial Revolution is set to change our way of life as humans at an unprecedented rate. Experts describe it as the "disruptor" that will remove all barriers between the physical, biological, and technological spheres of our daily existence. For those that embrace it, the Fourth Industrial Revolution serves as the door to unlimited possibilities and opportunities.

Fortunately, Nigeria is not excluded from the chance at prosperity that this incoming new world presents. In fact, the 'giant of Africa' as she's fondly called is blessed with human and material resources to be a driving force of the change. However, Nigeria's hope of taking a front seat in the Fourth Industrial Revolution remains a fairy tale as she battles inefficiency at several corners.

Worse? Nigeria's jewel, which is her female population, has been on the short end of the stick. According to the Nigerian Bureau of Statistics (NBS) latest report, Nigeria's females make up 49.4% of the country's total population. Still, females are grossly underrepresented and underutilized in Nigeria's economic and political space, amongst others. Consequently, this is also expected to negatively affect the country's readiness for the Fourth Industrial Revolution and its aftermath.

However, for every problem, there is a worthy solution. This paper employs the MECE (Mutually Exclusive and Collectively Exhaustive) approach to structure and study the current condition of the average Nigerian female. It looks at the cultural, economical, and political stance of being feminine in Nigeria.

The term "Fourth Industrial Revolution" was coined by the founder and Executive Chairman of the World Economic Forum (WEF), Klaus Schwab, in 2016. In the same year, the former professor published a book titled "The Fourth Industrial Revolution." There, he outlined his thought on the technological transformation that was reconstructing the world and "blurring the lines" between what we know as "biological, physical and digital."

However, while these previous revolutions improved the way we did things as humans, none directly changed us. This is what makes the Fourth Industrial Revolution stand out. The Fourth Industrial Revolution is driven by groundbreaking technologies like Artificial Intelligence (A.I.), Internet of Things (IoT), Blockchain, Virtual Reality, Biotechnology, and several others that will reinvent how we live totally.

Blockchain is already redefining the concept of money with digital currency such as Bitcoin. A.I. is redefining the workplace with automated operations. Biotechnology is redefining our health system, as well as many other examples. No one is spared, and no process is left out. Consequently, this makes the Fourth Industrial Revolution, one of the most significant changes the world is to witness. And without a doubt, its understanding and exploitation are vital to any nation's progress, including Nigeria.

First, we take a look at the cultural atmosphere of Nigeria to understand the role of her women in the Fourth Industrial Revolution. This is because the concept of culture entails the way of life of a group of people. In detail, Nigeria's cultural atmosphere over this topic can be seen as the attitude of the country's people towards women participation in the Fourth Industrial Revolution based on values, religion, and societal roles (gender roles).

This aspect is researched so that we can answer the most fundamental and vital question on Nigerian women's role in the Fourth Industrial Revolution. That is, "Does the Nigerian culture give room for women to take part in the Fourth Industrial Revolution?". To get an insight into the answer to this question, we take a look at the journal published by Ahmed H.G. and Abubakar M.B. of the Kaduna State Polytechnic in 2019. The journal is titled "Effect of Socio-cultural Factors on Women Entrepreneurship Development in Kaduna State."

Although the journal does not directly discuss the Fourth Industrial Revolution, it studies a similar term, which was Entrepreneurship in women. More importantly, it outlines the effect of Nigerian socio-cultural factors such as religion, values, and gender roles on women Entrepreneurship in Nigeria, using Kaduna metropolis as the area of study.

To carry out their research, Ahmed H.G. and Abubakar M.B. employed a descriptive survey research method in studying 332 women entrepreneurs across the Kaduna Metropolis. The women entrepreneurs were given questionnaires that focused on the degree of influence of religion, values, and gender roles on their business. At the end of the research, it was clear that the Kaduna metropolis' socio-cultural landscape was a major limiting factor to women entrepreneurship in the region.

A high percentage of the women reported that gender roles such as family responsibilities, religious perception, and so on were significant barriers towards entrepreneurship for them. For women participation in the Fourth Industrial Revolution, this is most likely going to be the same scenario as Kaduna is located at the heart of Nigeria and is a fair representation of a major part of the country. Thus, the answer to the previously asked question is – 'Nigerian culture allows women to participate in the Fourth Industrial revolution, but only at an unimpressive degree.'

Furthermore, the NBS reports detailed that out of the 4.5 million students who progressed to enrol for senior secondary education in 2016, only 46% were girls. Undoubtedly, this is a terrific drop from the  26 million children who enrolled in primary schools. However, for females, the situation is worse as the participation rate even dropped further to 46%. These figures, combined with a 28% completion rate on secondary education, shows that basic education is very poor for the average Nigerian woman.

The trend remains the same in terms of tertiary education as well. Females accounted for only 46.4% of Nigerians who were admitted into higher institutions for the 2016/2017 academic session. However, a closer look at the Nigerian Universities' enrollment rate revealed that the participation rate of women further dropped to 43.1%.

These reports detailed by the NBS explicitly conclude that Nigerian females are much shortchanged in acquiring quality education. This seriously lowers the capacity of women to handle the technical task in driving and sustaining the Fourth Industrial Revolution in Nigeria. Although it can be argued that several well-educated Nigerian women are capable of immense contribution, the larger percentage of the female population is inept.

According to a report published by the Center for Democracy and Development (CDD), women constituted only 4.17% of officials that were elected in the 2019 general elections. This was a decline from the 2015 polls which saw women occupying 5.67% of elected offices. Of course, this is non-impressive as women make up as much as 49.4% of the country's population.

There were several reasons for this decline. However, one fault that stood out was the sidelining of women in politics based on gender. A case study is that of Christina Eligwe-Ude, who was interviewed by a reputable e-newspaper, Premium Times.

Christina was a contestant under the Social Democratic Party (SDP), and she complained of threats to her life and manipulations she witnessed at the polls. It didn't matter that her qualifications as a former consultant at the United Nations beat that of other candidates. In the end, a previously inconclusive election was declared as conclusive. And worse, it was totally out of her favour.

This simple scenario outlines the fact that women would have a tough time taking on leadership positions in driving the Fourth Industrial Revolution even though they are qualified. And undoubtedly, the core reason for this would be Nigeria's unfavourable political atmosphere towards female participation in governance.

A quick recap of this research paper shows that women in Nigeria largely face unfavourable conditions culturally, economically and politically, which may hinder participation in the Fourth Industrial Revolution. However, solutions are not far from being attainable. Firstly, it is hard to change the set beliefs and values of a group of people. However, proper education and sensitization of incoming generations can aid in getting rid of vague customs. Hence, the Nigerian government and private institutions should structure learning programs to address and correct cultural frameworks that limit women's economic or political roles in driving the Fourth Industrial Revolution.

Secondly, Nigerian women's economic stance can be improved by taking measures to enhance the female education participation rate. This can be primarily guaranteed by the strict allocation of significant quotas to females at different levels of the education pyramid in the country. Also, alternative measures such as reduction of cost of basic education, development of alternative delivery systems, scholarships and increased hiring of female teachers are suitable for Nigeria. All these ensure women are provided with skills needed to drive the Fourth Industrial Revolution, as well as ensure economic development.

Lastly, women's role as political leaders to drive the Fourth Revolution can be improved by adequate legislation. An instance is the Gender and Equal Opportunity Bill, which was re-introduced to Nigerian lawmakers in 2019. These laws help ensure that female pursuits of political offices are safe from unfair restrictions and discriminations.

Reiteratively, the Fourth Industrial Revolution will change the world we live in entirely, and the place of women in it is undeniable. Social engagements, work operations, traditional family systems, and so on will be modified, and it will be a case of "all hands on deck." This offers Nigerian women an equal opportunity to contribute at the individual, family, community, and national levels. Provided that the right measures are employed to battle limitations as detailed in this paper, and create opportunities for female prosperity in the country.

Photo by Christina on Unsplash