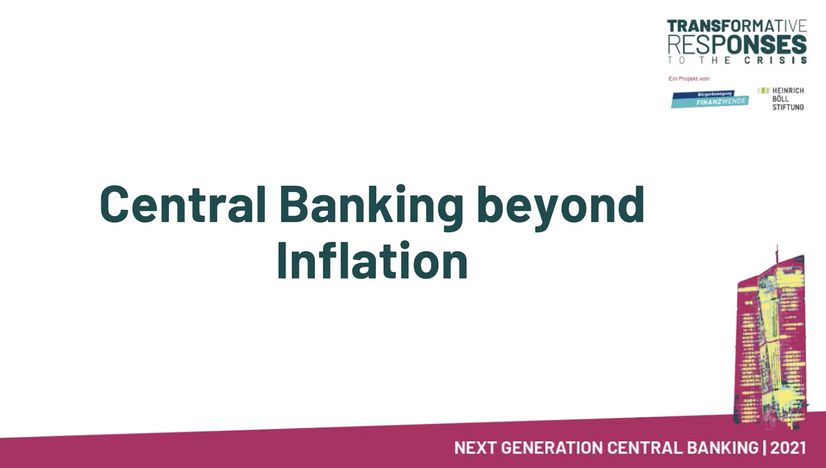 This panel was part of the conference "Next Generation Gentral Banking - Climate Change, Inequality, Financial Instability" 03. - 05.02.2021. In March 2020, central banks have once again proven to be the first line of defense in crisis-ridden times. With their far reaching actions they prevented the world from experiencing a collapse of financial markets on top of the severe health and economic crisis caused by Covid-19. Since the global financial crisis, central banks' roles and repertoire have vastly changed. The Federal Reserve has recently adopted a new strategy of average inflation targeting for its monetary policy and the European Central Bank is currently conducting the first strategy review in 17 years - President Lagarde has made it very clear that the ECB intends to address this new role. We believe that this calls for a wider debate on the role of central banks in times of financial instability, growing inequality and an escalating climate crisis. Central banks have powerful tools at their disposal. Should they - and if so, how - support policy goals beyond their traditional price stability mandate? The conference “Next Generation Central Banking: Climate change, inequality, financial instability” on 3-5. February 2021 provided a forum on these timely questions.

This contribution is a recording of the speed debate with Benjamin Braun (Max Planck Institute for the Study of Societies) and Michal Horváth (Chief Economist, Slovakian National Bank).

In this short speed debate Benjamin Braun and Michal Horváth discuss the future role of central banking in terms of tackling social inequality and climate change. Braun argues that although the holy trinity of inflation targeting (price stability as the primary goal, central bank independence as the institutional arrangement, short-term interest rate as the operational target) has been a successful achievement, it is nonetheless a specific institutional solution to macroeconomic problems in a specific historical juncture. The future of central banking will be a question of tackling "institutional amnesia" and will be decided in the political arena that will have to recalibrate the macrofinancial regime and the scale of monetary-fiscal coordination if a more climate friendly mode of economising is to be made feasable. Horváth however disagrees with repurposing the mandate(s) of central banks and predicates on the contrary that price stability and monetary policy of the last decade has been an important contributor to social justice and financial stability even, eventually raising the need for fiscal policy intervention. This is a fair point to an extent but neglects the reality of ECB's current 'one-size-fits-all' and unconventional monetary policies in a currency union experiment that suffers from intensifying macroeconomic imbalances between member countries and societal groups alike. Horváth's statement further neglects the fact that recent crisis mitigation measures provided merely a temporal fix and restructured cash flow commitments of both public and private sectors into the future and did little to make our global financial setting more resilient. According to Braun it is rather the elemination of monetary-fiscal coordination enshrined in the Maastricht Treaty that takes the central bank out of the equation in terms of fiscal policy and government debt and subjects states (and their population as a whole and welfare policies in particular) to market discipline. Independent central banks are themselves part of the macrofinancial regime that incapacitates fiscal room to maneuvre in the first place.