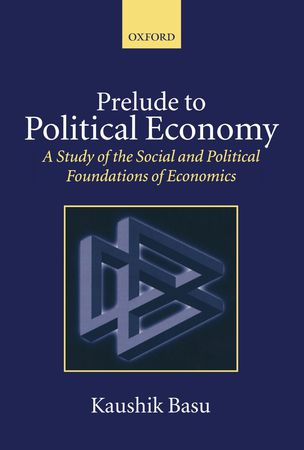 Mainstream economics was founded on many strong assumptions. Institutions and politics were treated as irrelevant, government as exogenous, social norms as epiphenomena. As an initial gambit this was fine. But as the horizons of economic inquiry have broadened, these assumptions have becomehindrances rather than aids. If we want to understand why some economies succeed and some fail, why some governments are effective and others not, why some communities prosper while others stagnate, it is essential to view economics as embedded in politics and society. Prelude to Political Economyis a study of this embeddedness; it argues for an 'inclusive' approach to institutions and the state.Modern economics recognizes that individuals' pursuit of their own selfish ends can result in socially suboptimal outcomes -- the Prisoner's Dilemma being the stark example. It has been suggested that what we need in such an eventuality is 'third-party' intervention, which can take the form ofimposing punishment on players. Kaushik Basu objects to this method of wishing third parties out of thin air. He argues that if a third party that could impose its will on others were available, then it should have been modeled as a player to start with.The adoption of such an inclusive approach has implications for our conception of the state and the law. It means that the law cannot be construed as a factor that changes the game that citizens play. It is instead simply a set of beliefs of citizens; and, as such, it is similar to social norms.What the law does for an economy, so can social norms. The book discusses how the nature of policy advice and our conception of state power are affected by this altered view of the state and the law.As corollaries, the book addresses a variety of important social and philosophical questions, such as whether the state should guarantee freedom of speech, whether determinism is compatible with free will, and whether the free market can lead to coercion.
Tags: free market | institutions | political economy | politics | society