Feminism for the 99 Percent – A Manifesto 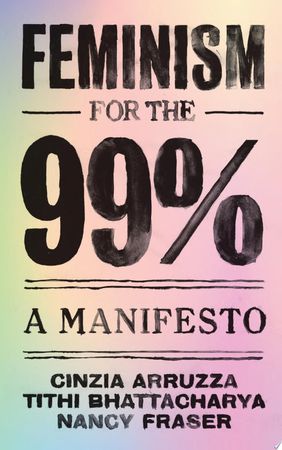 Named one of Vogue's "Most Anticipated Books of 2019" This is a manifesto for the 99 percent Unaffordable housing, poverty wages, inadequate healthcare, border policing, climate change--these are not what you ordinarily hear feminists talking about. But aren't they the biggest issues for the vast majority of women around the globe? Taking as its inspiration the new wave of feminist militancy that has erupted globally, this manifesto makes a simple but powerful case: feminism shouldn't start--or stop--with the drive to have women represented at the top of their professions. It must focus on those at the bottom, and fight for the world they deserve. And that means targeting capitalism. Feminism must be anticapitalist, eco-socialist and antiracist.

In this book, the authors, Cinzia Aruzza, Tithi Bhattcahrya, and Nancy Fraser, move away from the myopic view of feminism for a select few to focus on a universal idea of feminism. In their argument, the authors reposition capitalism as a central aspect for gender oppression, and argue that a global feminist movement needs to extend to an anti-capitalist, anti-imperialist, anti-racist, eco-socialist struggle. The book focuses on the revolutionary potential of feminist movements across the world and the challenge they pose to capitalism as a system. The focus of this ‘manifesto’ on ‘praxis’ makes it a much-needed and timely piece.

Recommended by Diversify and Decolonize Economics